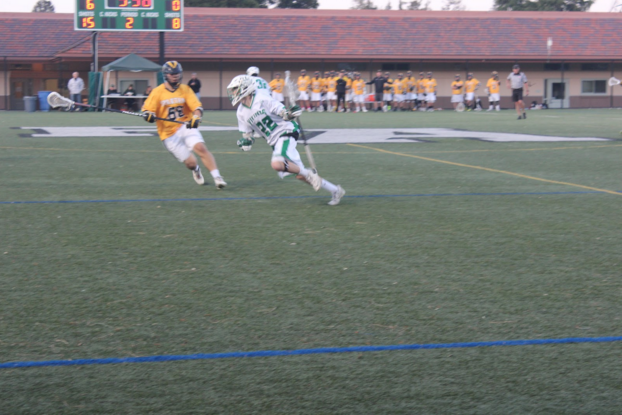 The Vikings got off to a great start as Matthew Seligson (‘16) scored a goal not even a minute into the game.

Palo Alto stayed strong throughout the entire game with a great shot by Jackson Dahl (‘17) to bring The Vikings’ ahead with a score of 2-0.

The Vikings continued their streak of goals by scoring another goal by a powerful shot from Hayden Libbey (‘17).

With only four minutes left of the first quarter, Seligson scored another goal to bring the Vikings’ score to 4-0.

The second quarter of the game did not stop the Vikings defense at all; Palo Alto kept Mountain View from scoring the entire first half. Cole Tierney (‘16) scored a fantastic goal while dodging Mountain View defenders.

Ariya Momeny (‘16) continued Palo Alto’s momentum with another goal for the Vikings.

The Spartans did not give up; they stayed aggressive on both offense and defense to try to close the gap, but the Vikings dug deep and it paid off because Seligson scored another goal, bringing the final score of the first half to 7-0.

Mountain View did not give up. After winning the faceoff, they scored a goal with a hard corner shot.

The Vikings quickly responded as  Seligson scored yet another goal with help from teammate, Louis Marzano (‘17).

The Spartans took off on a counter attack to score an unexpected goal against goalie, Quintin Valenti (‘16).

To finish out the game, Palo Alto scored the last goal of the night, bringing the final score to 11-2 for an exciting win for The Vikings.

The Vikings’ next game is away on Saturday April 30th against Saint Francis High School at noon.