Lady Vikes beat out Saratoga, 15-8, in semi-finals – The Viking Magazine 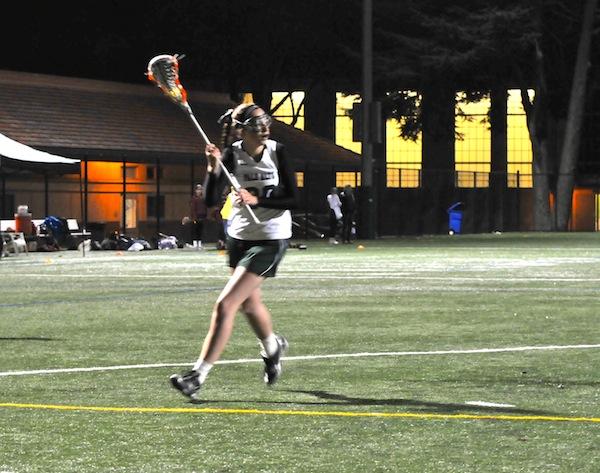 Coming off a tough 18-3 loss to Amador Valley, the Paly girls’ lacrosse team managed to edge out the Saratoga Falcons, 15-8, in the Santa Clara Valley Athletic League (SCVAL) Semi-Finals. The team rallied behind leading scorers and starting midfielders Charlotte Biffar (’13) and Nina Kelty (’13) who combined for an overall 7 goals on the night.

The Lady Vikes started out strongly in the first half as Kelty, Biffar and attack Simone Buteau (’13) each scored, giving Paly a 3-0 lead. Biffar would then come back minutes later to record her second goal of the night.

The Falcons scored immediately after the ensuing faceoff as they managed to get their team on the scoreboard, 4-1.

As they maintained possession of the ball, the Lady Vikes’ attack Ami Drez (’14) and Genevieve Lucas-Conwell (’13) each scored, widening their lead to 6-1.

Saratoga, however, bounced back to tally two consecutive goals, once again closing the game to a three goal margin of 6-3.

As time wound down in the first half, Anna Dairaghi (’13), assisted by Kelty, and Allie Peery (’15) cut the Falcon’s offensive campaign by each scoring, allowing the Vikes to walk off the field with a score of 8-3, at halftime.

Coming into the second half, Paly struggled with passing and turnovers, giving up 2 quick goals. Kelty settled the score by finding the back of the net twice more.

The rest of the second half would exhibit a scoring stalemate between the two teams as they both continued to breakdown each other’s defenses. The Lady Vikes managed to hold off the Falcons however, and will advance to the SCVAL Championship game.

Although her team captured the win, midfielder Kristen DeStefano (’14) felt her team struggled throughout the game but is optimistic for their championship game against St. Francis.

“I’m a little bit disappointed because we didn’t connect as a team,” DeStefano said. “We dropped a lot of passes and had unsuccessful plays. Overall, we got our business done and we’re going to the championship so we’ll have our chance to play better.”

Like DeStefano, Nesbitt thinks her team is up to the challenge of taking on the talented Lancers, a team that they have managed to stay undefeated against this season.

“It’s really hard to beat a team three times but I think we have the skill,” Nesbitt said. “We just have to work hard, be smart, and be ready to take care of business.”

The Lady Vikes will take on the St. Francis Lancers on Saturday, May 11th at Burlingame High School.