Baseball comes up short against Wilcox, losing 7-3 – The Viking Magazine 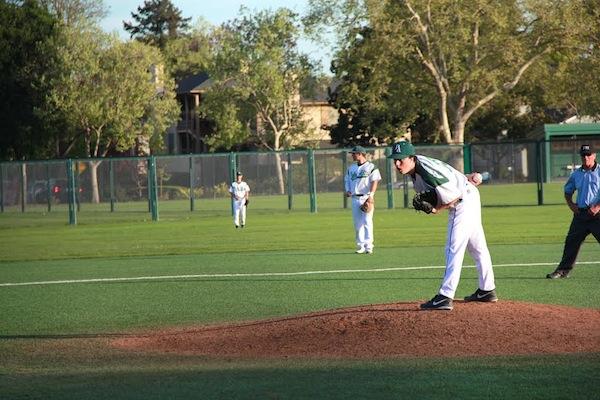 Walker Ritchie ('15) prepares to pitch for the Vikings. The Vikings fell to the Chargers 7-3.

The Palo Alto Vikings’ baseball team were defeated by the Wilcox Chargers at home on Wednesday, March 19th.

The top of the first inning started out with Brian Kannappan pitching for the Vikings. The Chargers started off fast with getting two consecutive runs. They continued their momentum with a triple in the right center gap scoring two runs on the hit.

The Vikings started the bottom of the first with a single from Bowen Gerould (‘14) but received two consecutive outs. After a triple from Jack Clesby (‘14) and a walk from Austin Kron (‘14), Phil Lewis (‘15) hit a triple and Cleasby and Kron were able to run home, scoring the first two runs for the Vikings. Lewis ran home after Noah Phillips (‘14) was was walked, allowing the Vikings a 3-2 lead over the Chargers at the end of the first inning.

The Vikings continued defense to play well at the start of the second inning recording the first two outs on routine ground balls.  The third hitter of the inning walked and then advanced to second on a Kannappan balk. The top of the second ended with no runs for the Chargers. The Vikings earned three consecutive outs at the bottom of the second and maintained their 3-2 lead over the Chargers.

Justin Hull (‘16) began pitching for the Vikings at the top of the fourth. The Vikings got a quick out but the Chargers were able to come back and score a run. The Vikings were able able to tie up the game 4-4  after Phil was able to run home.

Hull continued his pitching into the top of the fifth and the Vikings were able to get two quick outs. Isaac Kasevich (‘15) took over pitching, and after a quick out the Vikings were up to bat. They quickly got three outs and the score remained tied at 4-4.

Kasevich continued pitching at the top of the sixth but Chris Smith (‘14) closed the inning for the Vikings. However both the Vikings and the Chargers were unable to score any runs during the sixth.

Phil Lewis (‘15) believes his team played well despite the loss.

“The other team through strikes and thats why we lost, but I thought we were competing until the seventh inning and it kind of blew open, but all and all I thought it was a good fight,” Lewis said.

The Vikings will face the Chargers again this Friday, March 21st, at 4 p.m. at Wilcox High School.