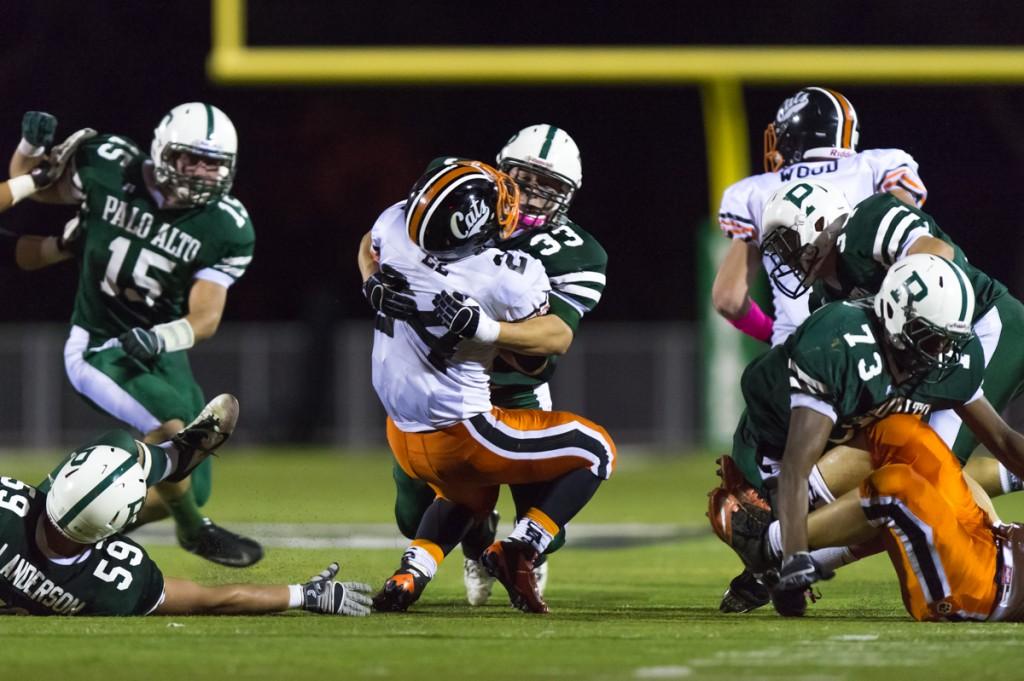 Linebacker Erik Anderson ('13) tackles a Los Gatos player for a loss. Anderson was one of the defensive impact players that was injured during the Vikings 25-7 victory.

With defensive-minded San Francisco 49ers coach Jim Harbaugh in the stands, the Paly football team (5-2-0) romped rival Los Gatos (4-3-0) 25-7, behind a stout showing from its defense.

The Vikings were the first to put points on the board when running back Matt Tolbert (’13) dashed down the sideline for a 70-yard touchdown on Paly’s second offensive play of the game.

However, a recurring problem for the Vikings, the PAT unit, failed once again to execute an extra point after a botched snap sailed above the placeholder’s head, causing the score to remain 6-0. The Vikings’ standout defense would go on to shut down the Wildcats for the remainder of the first quarter.

Then, on the first play of the second quarter, Paly continued to dominate immediately as quarterback Keller Chryst (’14) hooked up with wide-receiver Malcolm Davis (’14) for a 48-yard touchdown to increase the Vikings’ lead to 13-0.

Later that quarter, Tolbert would help push the offense down the field, causing the Wildcats to hone in on the run game. This allowed Chryst to complete his second long score of the night, as he connected with wide receiver Jayshawn Gates-Mouton (’13) for a 62-yard touchdown. Once more, however, the PAT was missed, which resulted in a 19-0 Viking lead.

Near the end of the first half, the Wildcats maintained their first relatively successful drive of the night, but were soon silenced once more as defensive ends Drew Rider (’13) and Justin Rittman (’14) pushed the line of scrimmage out of the red zone by recording consecutive sacks and tackles for losses. This became important when the Wildcat kicker found himself out of range for an attempt at a field goal, which allowed the Vikings to completely shut out the Wildcats in the first half.

The second half, however, displayed a deadlock between both sides. Struggling to put any points on the board, each team had a series of short possessions until Chryst recorded the only Viking touchdown of the second quarter on another pass to Gates-Mouton, this time for a 46-yard score, which gave the Vikings a 25-0 lead.

Although Los Gatos running back Joey Wood went on to score in the last three minutes of the game, defensive coordinator Jake Halas felt that the Viking defense shined most on the field.

“We have some explosive guys on offense,” Halas said. “But we play defense at this school and people forget that.”

Halas recognized his linebacker and defensive back corps as major components of the huge defensive stands.

“Our linebackers really brought it,” Halas said. “We played man coverage the whole game. I said our defensive backs were better than theirs and they just locked them down.”

Paly kept the Wildcats from driving the ball down the field throughout the game, and away from the red zone. Among the top defensive players of the game was linebacker Andrew Frick (’14), who recorded two sacks, one forced fumble and a number of tackles.

Head coach Earl Hansen echoed what Halas and Frick had to say. However, he believes the Vikings’ offense proved to be a major factor contributing to the blowout.

“There was no question that defensively they had no answer for us,” Hansen said. “We out-hit them, we were more physical than they were and we knew their plays before they called them. This was our top game against a top team.”

Among some of the impact players for Paly on the offensive side of the ball, Chryst completed 9 of his 20 passes for 232 yards and three touchdowns, while Tolbert rushed for over 120 yards and one touchdown.

Despite the big win, Paly lost two of its starting linebackers, Erik Anderson (’13) and Gunnar Felt (’14), for the majority of the game. Anderson’s injury looked to be less serious after suffering what seemed to be a sprained ankle, while Felt was put in a full leg brace. The trainers were concerned that he had torn his ACL.

Nevertheless, looking at the scoreboard, Halas feels that his team overall played the best they had all season.

“That doesn’t lie right there,” Halas said.  “We beat them down. I’m proud of our guys this week and we have some tough kids.”

The Vikings will face the Saratoga Falcons next Friday night in the annual Homecoming game at 7:30 at home.