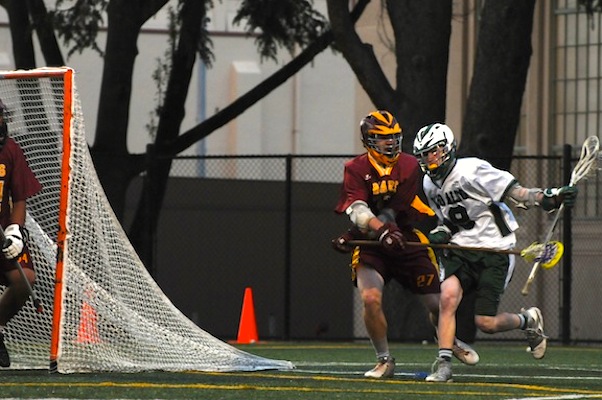 Jonny Glazier (13′) challenges from behind in the match-up against Menlo Atherton.

Paly responded with an offensive drive to Menlo-Atherton’s goal led by attack John Brunett (’11) but were not able to score. The rest of the quarter was plagued with bad offense possession.  The Viking defense had to step up to keep the score 1-0 at the end of the first 12 minutes.

The second quarter remained the same, with Viking defense fighting to keep the Bears at bay and Menlo-Atheron attacking relentlessly. The second goal of the game came with 4:58 left in play, and the half was closed off in the last 12 seconds when Menlo-Atherton came out of a time out and scored 45 seconds later leaving the halftime score at 3-0 Bears.

“In the first quarter we were really flat,” attack Jonny Glazier (’13) said. “We [were] really slow this whole week during practice and in the second half we realized we had to hustle and that we aren’t [going to] win league if we keep playing how we were.”

The third quarter threatened to have the same outcome for the Vikings as Menlo-Atherton came in and scored two early goals. However, the tone began to change when Glazier put Paly on the scoreboard with a bounce shot with 2:38 remaining in the quarter.

Glazier had two goals on the night.

The goals seemed to follow as the Vikings gained momentum when attack Zach Spain (’11) scored a side arm rip with an assist from Brunett. The Vikings were able to shutout Menlo-Atherton in the third quarter, ending the quarter with a score of 3-2.

Paly’s momentum only increased in the final 12 minutes. 30 seconds into play, midfielder Walker Mees (’13) added his first goal of the night to tie the game up. Shortly after, Brunett won the face-off and went straight to goal, making the score 4-3 and giving the Vikings the lead for the first time that night.

Both goals were scored while the Bears were a man down due to an illegal stick check which resulted in a one minute unreleasable penalty for Menlo-Atherton.

The Vikings would allow two goals the final quarter and put away three more of their own. However, at the end of the period, the teams were tied 7-7 and the game went into overtime.

“I’m not sure how we suddenly clicked in the fourth quarter,” said goalie Josh Chin (’11). “It was just going back to the fundamentals, picking up ground balls, getting good passes,we finally just cleaned up our act.”

The first four minute period entailed back and forth play between the two teams, both having excellent chances to put away the game. However, the breaking point came in double-overtime when a mistake in Paly midfield led to a five on three offensive situation for the Bears. They took advantage of the odds and put away a final goal leaving the score 8-7.

Despite a valiant comeback, Viking’s head coach Craig Conover felt the team did not do enough early on to truly compete with Menlo-Atherton.

“At the end of the day you cant be the team that shows up in the second half,” Conover said. “They didnt beat us in the double overtime they beat us in the first half. We had multiple opportunities to win that game and we just broke down on fundamentals like passing and catching.”

The Vikings will face off against Menlo at Menlo at 4:00 next Tuesday.

“This team always needs something to play for,” Conover said. “It’s never ‘I need to defend my championship’, it’s ‘I need to win my championship’. We have a reason to play now, we are no longer the best team in the league we have to prove something.'”