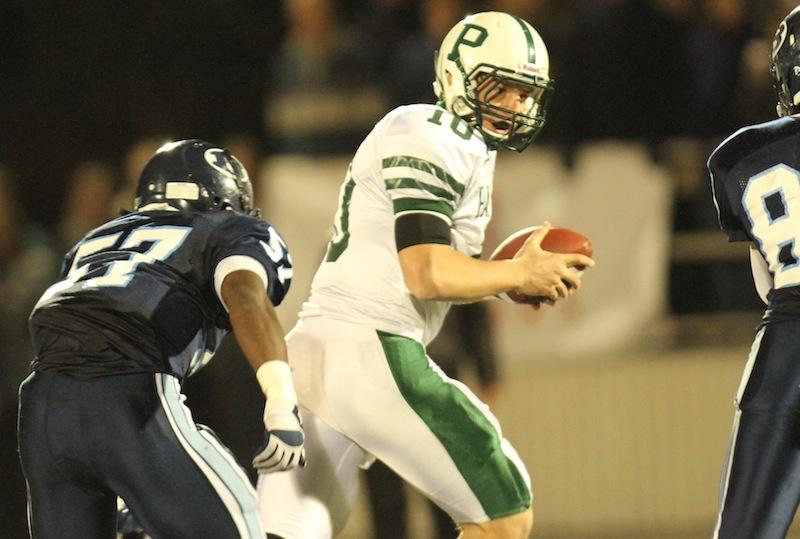 The Palo Alto High School football team fell to the Bellarmine Bells 41-13 in the Central Coast Section (CCS) Open Division Championship game at San Jose City College on Dec. 2, in a rematch of the game played last year. The loss ended the Vikings’ hopes of defending their 2010 State Championship.

The story of the matchup was the battle between Bellarmine’s triple option attack and Paly’s West Coast style offense. Both teams came into the matchup averaging 38.4 points per game. Paly ended up on the short end of the offensive battle, as the defense was unable to contain the running game of quarterback Travis McHugh (‘12) and the Bells, whose ground and pound philosophy proved fatal for the Vikings.

“I think the other team was a little better, they beat us up front, we didn’t play our best game and I give them all the credit in the world,” coach Earl Hansen said.  “They played very well.”

In a scene straight out of Pop Warner’s era, the Bells ran the double wing offense to perfection en route to over 300 yards on the ground. With a performance reminiscent of Tim Tebow of the Denver Broncos, McHugh rushed for 206 yards on 20 carries, tacking on three touchdowns. He also passed for 64 yards and a touchdown, in addition to handling kicking and punting duties.

B.J. Boyd (‘12) started off the Viking’s opening drive with a kickoff return of 37 yards, almost breaking free of the Bellarmine special teams. However, the drive stalled as the Vikings went three and out.

Paly’s defense looked to respond with a three and out stop of their own, and they got what they wished for as they stopped they stopped Bellarmine’s three-pronged attack. Dre Hill opened up Paly’s next possesion with a four yard run, and on the next play quarterback Keller Chryst (‘14) completed an eight yard pass to Jayshaun Gates- Mouton (‘13). After a run of no yards by Morris Gates-Mouton, Chryst was intercepted by Bellarmine’s Tim Crawley (‘12).

The Paly defense stepped up once again with a second straight three and out. However, Paly was unable to manufacture much on the offensive side of the ball, as they too went three and out on their next possession. The short drive was capped off by a sack of Chryst for a loss of two yards.

The sack proved to be costly as it gave the Bells great field position starting at their own 46 yard line after a punt. The Bellarmine offense wasted no time as quarterback Travis McHugh broke off a 54 yard touchdown run. McHugh missed the extra point, making the score 6-0. Paly responded just as quickly, as B.J. Boyd returned the ensuing kickoff right up the gut for a 98 yard touchdown. The return was Boyd’s fifth touchdown return of the year.

Bellarmine’s triple option and running game took over at this point in the game as the Bells started the first of many grueling, time consuming drives highlighted by their talented group of backs. Crawley, McHugh, and Justin Taliaferro (‘12) all touched the ball multiple times on the ground for the Bells.

Bellarmine responded to Boyd’s kickoff return with an 11 play, 73 yard drive that was capped by a McHugh touchdown run. The drive ate up five minutes and 40 seconds and wore down the Paly defense with bruising runs from McHugh and quick bursts to the outside by Crawley.

Paly’s next drive was highlighted by 21 yard Morris Gates-Mouton (‘12) run, but the drive soon stalled. The Vikings were forced to punt, and once again felt the wrath of the Bellarmine offense.

The Paly defense got of to a good start, forcing an incomplete pass and false start. However, on the next play McHugh found tight end Alex Manigo (‘12) for a short gain, which was turned into a 22 yard gain due to several missed tackles. The rest of the drive consisted mostly of runs by Crawley and McHugh and finished with a McHugh touchdown run. This time consuming drive consisted of 13 plays for 80 yards as Bellarmine extended its lead to  to 20-7.

Things got worse for the Paly offense, as Chryst was sacked on 3rd down for a 14 yard loss by defensive tackle Brad Kuh (‘12), who came in untouched.

With 1:14 left in the half, Bellarmine looked to tack on to their 13 point lead. Due to the sack, Bellarmine recieved good field position after the punt, which led to them taking over possesion at the Paly 40. After 3rd and 2, the Bells false started, leaving them with a third and seven. McHugh completed a first down pass to Manigo, and a facemask penalty by Paly put the Bells at the 15 yard line. McHugh wasted no time, finding Jared Vallner (‘13) for a touchdown. This capped off a quick six play, 40 yard drive which lasted only 57 seconds.

The Vikings got the ball one more time before the end of the half, but Chryst was sacked on second down as the Vikings let the time expire. The Vikings headed to the locker room down 27-7, looking for an answer to Bellarmine’s ground attack.

To start the second half, Tori Prati (‘12) of the Vikings kicked it off to the Bells, who started their possession at the 19 yard line.

McHugh then proceeded to engineer a long drive that consumed nearly half of the third quarter and ultimately culminated in a 23 yard touchdown run by Crawley. Following McHugh’s extra point, the Bells’ lead grew to 34-7.

“They are very well coached and they have good technique,” Paly linebacker Brennan Miller (‘12) said.  “Their scheme is hard to stop.”

Boyd returned the ensuing kickoff to the 15 yard line, but after picking up one first down the Vikings were forced to punt the ball back to Bellarmine after a sack and a pair of incompletions.

The Bells again found paydirt on their next drive, chewing up several more minutes of time as the relentless rushing attack marched down the field gaining several first downs including a conversion by McHugh on a bootleg that went for 13 yards. Later, when McHugh was brought down at the one yard line by Jayshawn Gates-Mouton (‘13), the Bells punched it in on the very next play on a run by the fullback Taliaferro. After McHugh’s point after, the score stood at 41-7.

Paly’s next drive began at the 20 after a touchback on the kickoff, and after a couple of big passing plays, the Vikings began to threaten. A pass intended for Boyd was deflected and intercepted, however, and the Bells again took over, this time at their own two yard line.

McHugh’s night at quarterback ended after a final first down, as the Bells brought in Kenneth Olugbode (‘13) to gain some experience late in the game. The Viking defense forced a punt shortly thereafter, and Paly got the ball back at the 47 yard line.

On the first play of the next drive, Chryst was pressured but scrambled out of the pocket and hit Boyd on the run for a 47 yard touchdown to cut the deficit to 41-13. The Vikings failed to convert the extra point.

This was the last score in the game, and after an unsuccessful onside kick attempt by Paly, Bellarmine quickly punted. The Vikings were unable to do anything with their last possession as the clock wound down, with several long passes from Chryst falling incomplete.

This capped a disappointing game for the Vikings, who had hoped for a victory that might have propelled them into the State Championship game for the second straight year. Although the team had a largely successful year, the bitterness of the loss to Bellarmine will not soon be forgotten.

“We had a good season and we are pleased, but we aren’t pleased with the final result,” center Spencer Drazovich (‘13) said.

Hansen had a slightly more positive outlook following the game.

“In total, I am very proud of these guys, we have improved tremendously, we had a nice streak going, we made it to 13 games,” Hansen said.  “How many teams do that?”

Although it may seem hard to stomach right now, Miller knows that the team still had a good year and must remember that.

“[The loss] doesn’t change the face that we won leagues and won 10 games,” he said.

The team finished the year with a record of 10-3 and a Santa Clara Valley Athletic League Championship.