Girls’ soccer surges past Gunn in first half 3-1 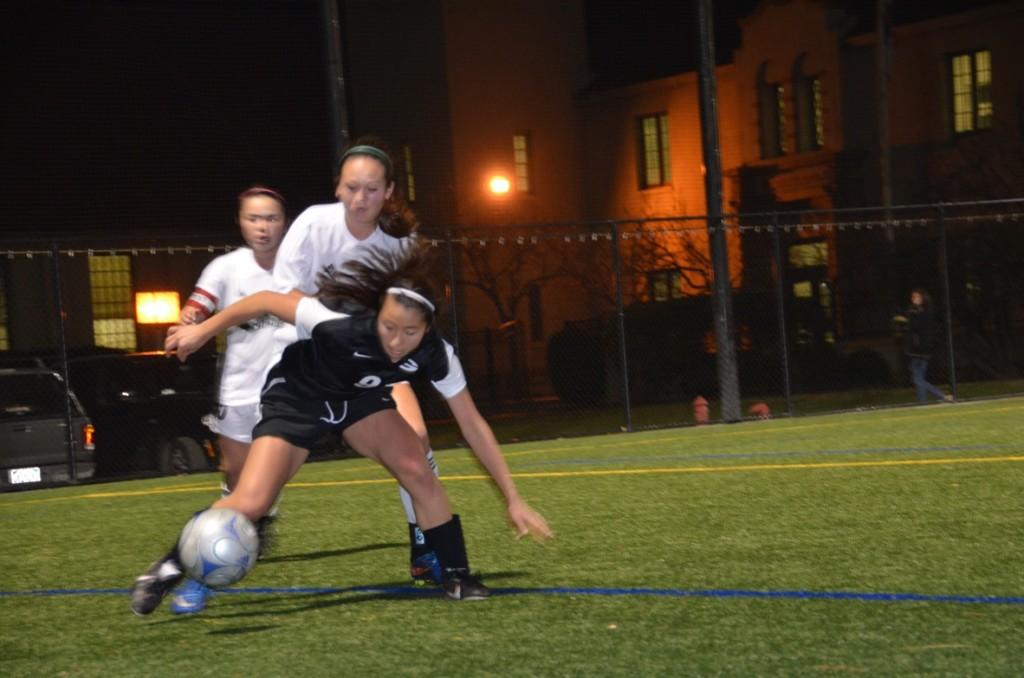 Nina Kelty ('13) attempts to steal the ball from a Gunn defender. Kelty scored the third goal for the Vikings.

The Palo Alto High School-Gunn High School rivalry clearly fired up both of the respective schools’ varsity girls’ soccer teams tonight on Paly’s El Camino field: after a fast-paced first half, Paly finished the game with a 3-1 victory, the same margin that the Titans had beaten the Vikings by in their previous meeting.

Just ten minutes into the game, defender Mira Ahmad (’12) scored her first goal of her high school career after missing the entire season because of numerous concussions. The Lady Titans responded with a goal of their own from national team member midfielder Sarah Robinson (’14) tying up the game at one with just 25 minutes remaining in the first half. The Lady Vikes, feeding off the energy supplied by Ahmad’s goal, responded with two goals back to back from midfielder Sunny Lyu (’14) and defender Nina Kelty (’13), the latter assisted by forward Jordan Smith (’13). Going into halftime, Paly had a commanding 3-1 lead. 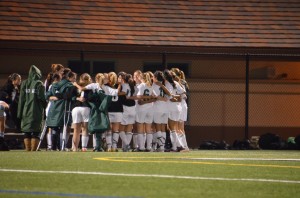 The Lady Vikes receive a pep talk at half time.

Lyu was full of energy going into the game, ready to put points on the board for Paly.

“It definitely feels good to beat them and get revenge like that,” Lyu said. “We started out and continued to have really high energy and so that is why we were able to attack.”

Despite numerous attempts on goal from both teams, the second half remained a defensive battle. Paly goalie Erin Chang (’13) kept the game in Paly’s favor, clearing the ball out of the goal box before the Lady Titans got too close.

15 minutes from the end, Gunn’s midfielder Alyssa Perrault (’12), who will play soccer for Wilamette University next year, went down with a knee injury that sidelined her for the rest of the match. After a further defensive stalemate, Paly gained redemption with a 3-1 victory.

Chang credits the Vikings’ win with their pre-game warm up, which she believes set the tone for their level of play.

“We had a really focused warm-up so everyone was ready to play, “ Chang said. “I think it was more of our warm-up that changed, in the past our warm-ups haven’t been [as] focused and [we weren’t] quite ready for games, so the high intensity was a big factor for the game.” 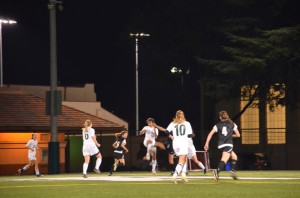 Mira Ahmad ('12) traps the ball on Paly's side of the field. Ahmad scored her first goal of the season tonight after being unable to play due to concussions.

In terms of playoffs, the Lady Vikes’ future is up in the air. Gunn and Paly are counting on the success of the CCS (Central Coast Section) seeding meeting and positive results in their last three league matches to determine chances at CCS playoffs.

“Right now in the standings we’re definitely in the lower half because we’ve only had one win up until now, and the teams around us in the standings also only have one win, so this win probably pushed us up a little bit,” Chang said. “We’re hoping if we do well for the rest of the season we can [advance to the playoffs].”

Girls’ soccer surges past Gunn in first half 3-1