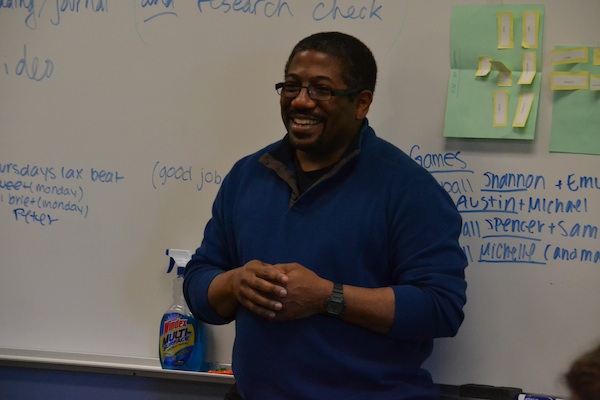 Sports Illustrated columnist Phil Taylor addresses the staff of The Viking. Taylor has been working at SI since 1990.

Jump to Comments
Share on Facebook
Share on Twitter
Share via Email
Print
Sports Illustrated columnist Phil Taylor, who currently writes the “Point After” column on the magazine’s final page, visited The Viking today to discuss his career and offer some insights into professional sports journalism.
The unassuming Taylor effortlessly commanded the room, holding the attention of all the students with a series of humorous anecdotes from his journalism career. In the process, Taylor managed to get across several of his points about journalism, while keeping the audience engaged.
For instance, while discussing the negative aspects of journalism, instead of referring vaguely to making some of his subjects angry, Taylor told the class a story about his experience writing an unflattering story about Derrick Coleman, an ex-NBA player.

Taylor had written a story about the poor behavior of several young players in the NBA, with Coleman as the main focus. Coleman was also featured on the cover of the magazine, and was livid after seeing the cover photo and reading the story. Taylor figured that it would be best to go talk to Coleman in person so as to not cause Coleman’s hate to fester. Taylor used this situation as the vessel for one of his tips to The Viking today.

“When you write stuff about people that you know they’re not going to like, it’s best to see them face to face,” Taylor said.

Following his own advice, Taylor went to see Coleman a few weeks after the story ran. After a brief confrontation and staring match, Coleman eventually told Taylor to never talk to him again, and avoided him for the rest of his career.

“That’s kind of the risk you take, and you have to live with that,” Taylor said.

Taylor also offered some other stories about his career, which he used to relay more helpful journalism tips. One piece of advice he gave the The Viking staff was to try to get subjects interested in their interviews by asking fresh, unique questions more likely to elicit candid responses. One time he was interviewing NBA star Tim Duncan, for instance, and could tell that the conversation was going nowhere. So, on a whim, he asked Duncan to describe the contents of his refrigerator. Duncan perked up from that point on, and Taylor was able to get a more interesting set of quotes.

One final piece of guidance Taylor offered to The Viking was one he picked up at Sports Illustrated. He spoke of his experience interviewing NBA player Kobe Bryant after a Lakers’ game, in the passenger seat of Bryant’s Lamborghini as they sped down the freeway at over 100 miles per hour. Taylor subsequently detailed the experience in his feature on Bryant, and used the story today to underscore the importance of one last message for The Viking.

“We’re trying to be the eyes and ears of the readers,” Taylor said. “We try to put the reader in the passenger’s seat with Kobe Bryant.” 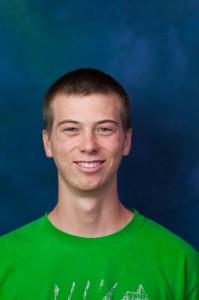