Girls’ varsity soccer undefeated in league with another easy win 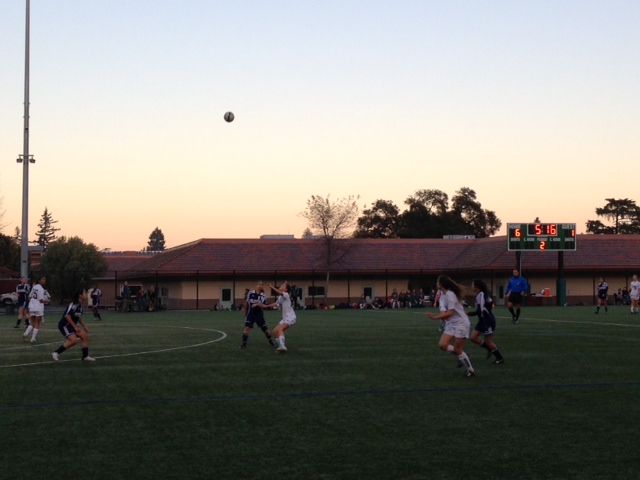 Alys Olmstead ('16) prepares for a header against her opponent as the ball nears. Olmstead and other attackers dominated the field scoring six goals.

The Paly girls’ varsity soccer team had yet another successful defeat this Wednesday at the Paly home turf. The lady Vikes beat Milpitas 6-1, leaving them undefeated in their league.

Overall, the Vikings are satisfied with their win, h0wever, Coach Seedman believes that the girls’ didn’t play to their full potential.

“I think we took the opponent a little bit lightly, we didn’t really do the things that we needed to do to play at our level,” assistant coach Eric Seedman said.

“We came out confident and played pretty good. It wasn’t our strongest performance but we did what we needed to do to win,” Foug said.

The Vikings started out the first half with a dominant presence, with Foug scoring the first goal of game within the first few minutes.  Paly’s attack continued to maintain possession and dominate, with Nina Kelty (’13) faking out defenders for an easy goal, putting Paly up by two.

The Vikes once again took control of the ball, as Heidi Moeser (’16) intercepted a pass by the goalie, assisting Sunny Lyu (’14), who scored to give the Vikings a 3-0 lead.

Once again, Foug maintained possession of the ball making a quick pass over to Lyu for an goal, allowing the Vikings to increase their lead. As halftime was approaching, Paly lost control giving Milpitas the last goal of the half. Going into the second half, the lady Vikes held a 4-1 lead.

“I think that when we were up so much we don’t really think that anything could make us lose so we probably got a little cocky but we still played well, ” Foug said.

A few minutes into the second half, Foug received the ball and she identified her open shot, kicking the ball passing over the goalie’s head. The Vikings now lead Milpitas by 4. After back forth play, Paly was finally able to find the back of the net again, with the last goal of the game. Moeser took it down the sides easily passing her two defenders and made a move, faking out the goalie for a clean shot, finalizing the score to 6-1.

The lady Vikes will take on Cupertino High School this Friday at Cupertino.

Girls’ varsity soccer undefeated in league with another easy win