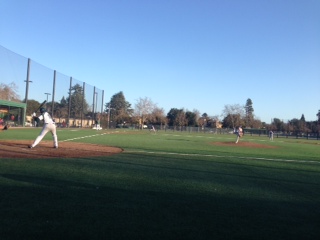 St. Ignatius started off hot driving in two runs before the Vikings could take to bat.

The Vikings, however, struggled in the opening inning, as Austin Poore (’13) was the only one of the first four Paly batters to get on base.

The Vikings were unable to produce any runs for themselves until they found themselves down 4-0.

At the bottom of the fourth inning, the Paly offense finally came to life. Starting with a Danny Erlich (’14) line drive to left center, good for a single, Austin Kron (’14)  grounded one up through the St. Ignatius infield, to reach center field, moving Daniel Tachna-Fram (’14) (pinch runner for Erlich), and himself to first.

Rowan Thompson (’13) was up to bat next and was walked to first, following being pegged while at bat, loading the bases.

Kron and Tachna-Fram would be driven in by the end of the inning, to finally cut the St. Ignatius lead down to two. As the fifth inning rolled up it seemed as if the Vikings were on the verge of coming back, halting St. Ignatius from scoring at all, Paly carrying momentum heading into the bottom of the fifth.

Unfortunately for the Vikes, they went three-and-out.

St. Ignatius went on to pour it on the Vikings, scoring five more runs to the Viking’s one run, leaving the Paly field with a 9-3 victory under their belts.

“Our tempo was good when getting on and off the field and keeping the game moving, but we need to execute better in the field and attack the ball at the plate,” Kron said.

The Vikings are set to play St. Francis at home, Saturday Feb. 23 at noon.