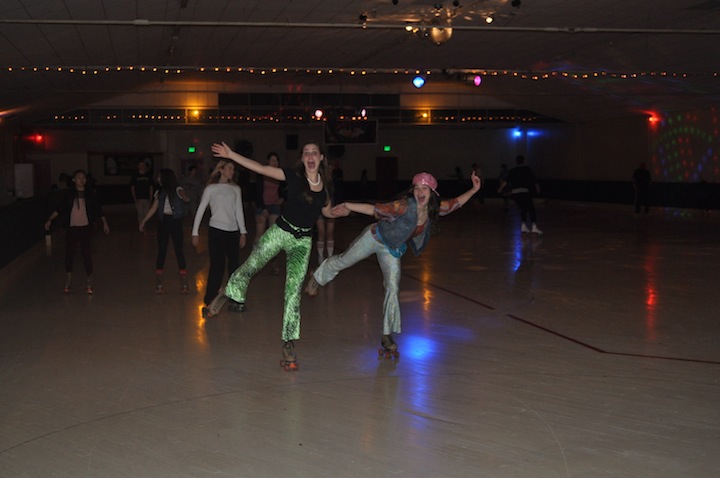 Staff members Pippa Raffel (‘14) and Audrey Debruine (‘14) pose for the camera. The two along with other staffers tried their hand at Roller Disco at the Redwood Roller Rink.

There was only one possible cure: hit the roller disco. Our staff, clad in bell bottoms and fur, piled into a time machine and took a trip to funky town. When we arrived at our destination, Redwood Roller Rink, the five of us were ready to get groovy, baby.

We were so excited and just couldn’t hide it as we entered the rink. Admission and rentals cost a grand total of $14, or the equivalent of $3.85 in 1978, which was a steal for the amount of fun we had.

Roller disco was a sensation that swept the nation in the 1970s, peaking around 1980. The combination of disco music, dance, and lighting and the opportunity for sweet moves provided by roller blades made for an irresistible way to spend a weekend night.

As we strutted in, we couldn’t help but turn heads; who wouldn’t want to check out the five most impeccably dressed disco-ers in rink? We quickly laced up our vintage quad skates and carefully and somewhat hesitantly rolled onto the smooth wooden rink.

We know what you are thinking. What is the difference between good old fashioned quads and your typical inline rollerblade? Inline skates have one line of wheels and are better suited for skating speedily outdoors. Quads, on the other hand, have four wheels in a square, and are intended for moving and grooving indoors.

Audrey impressed early with natural pizazz as she effortlessly glided and hustled her way about. It seemed like she just couldn’t get enough of the rink. For Pippa, the ice princess, with a history of figure skating, it took a couple minutes to get into the groove, but once she adjusted to her new boogie shoes, she was ready to freak out.

For the other three, however, simply putting one skate in front of the other proved more challenging. Colin was on the ground within seconds of entering the rink, and he ended up spending more time sitting on his groove thing than shaking it. Alan and Tara fared slightly better, managing to waddle around without plopping too much, and they picked up speed as the night progressed.

In the middle of the session, the lights came on and the DJ skated out onto the rink to lead the skaters in a dance to “Cupid Shuffle” by Cupid. Pippa and Audrey effortlessly sidestepped to the beat, but Colin was having a little more trouble feeling the beat and was pretty wobbly.

We had been dancing the night away for so long that our feet started to cramp, and we eventually decided that it was time to return back to the 21st century. (Plus, Pippa and Audrey have strict 11 p.m. curfews). As we retired our skates and left the rink, we couldn’t help but feel that we had left a part of ourselves out there on the dance floor.

Disco may have died out decades ago, but it is stayin’ alive in our hearts.