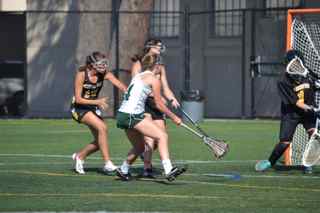 On a warm Friday afternoon, the Lady Vikings secured another victory against league opponent Mountain View.

Early in the first half the Vikings offense dominated the ball. A score from Ami Drez (’14) gave the Vikings momentum resulting in another score minutes after by Allie Peery (’15).

The Vikings held up good Defense against the Spartans however a foul from Paige Anderson  (’15) and change in possession gave the Spartans a chance to a score. The score was now 3-1.

With good movement down the field the Vikings were able to score 2 more times with the help of Drez and Peery.

A stop from goalie Meredith Kinnaman (’16) helped kept the Spartans from scoring. Anderson’s pass to Amelia Roth (’15) lead to an assist for another Peery goal.

Drez score again for her third goal holding the lead 5-1 with 7 minutes left in the half.

The Spartans took possession of the ball but Anderson’s forced a turnover leading to a strong pass from Maya Benatar (’16) setting up Lisa Rouge’s (’14) first goal of the contest.

Peery controlled the offense , and drove down the lane to score for the Vikings, a change in possession led to the ball back in Peery’s hands for another score securing an 8-1 edge.

The Spartans eventually scored a goal with a minute left in the half, however Reid Walters (’16) won the faceoff and Rouge fought off defenders for the ball, she passed it to Liana Prickwell (’15) for a goal, leading the Sparatans 8-2 at half.

Returning, the Spartans quickly scored a goal, however Ami and Peery both score for the Vikings. Increasing the score, 10-3.

The Vikings continued to have good defense as Lauren Gargiulo (’15) gains possession from the Spartans and passes it off the Drez for another Vikings goal.

Roth gained possession of the ball after a missed shot from the Spartans. She passed to Walters and found Drez for another score for the Vikings.

Paige Bara (’15) recovered the ball from the Spartans and passed to Peery down field for her of 6th goal the night. The Vikings then again score making the score 15-4.

The Vikings were pleased with their performance but still felt that  they could have play better.

We played well, ” Rouge said. “We came into thinking that were just going to come and dominate them but I think we got it together at some points. We could have executed a little harder.”

Coach Nesbitt agreed with Rouge in respect to the game plan.

“We were not exciting everything as well as we could have but I think we came together in the end and  took care of what we need too.” Nesbitt said.

Nesbitt was excited that all of her players contributed to the victory.

“I think we had a lot of players come off the bench and keep the level were it needed to be which is awesome …  a lot of speed and hustle of the bench.” Nesbitt said.

The lady Vikings look forward to improving for next week, ” I think this shows that we still have some things to improve early in the season and that we have time to bounce back.” Kinnaman said.

The lady Vikings take on the Pioneers next Tuesday at 6 p.m.