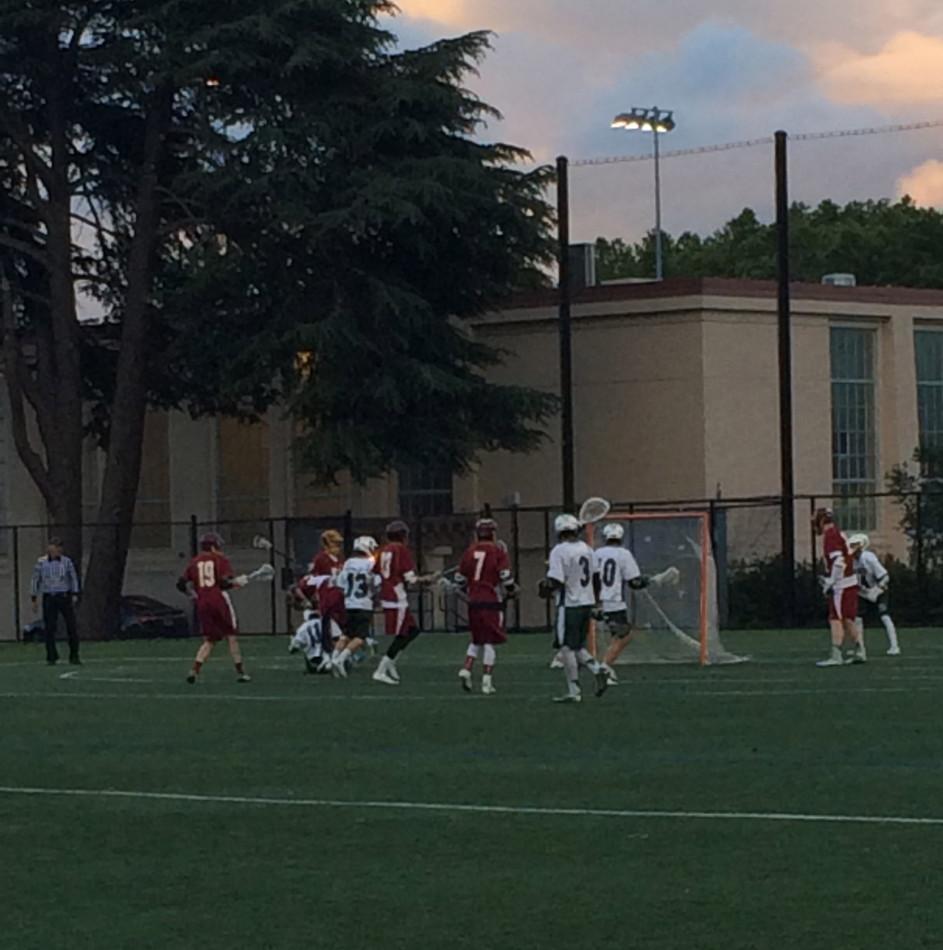 Jordan Gans ('14) falls to the ground after scoring a goal. Although he lay on the ground for a few minutes complaining of minor injuries, he continued to play for the rest of the game.

After an intense battle in heavy wind and rain, the Palo Alto boys’ lacrosse team triumphed over Menlo Atherton 5-4 on Friday night.

Paly started off the game strong, immediately grabbing the lead with goals by Tully McCallister (’14) and Matt Seligson (’16). Menlo Atherton’s offense could not keep up with Paly’s defense despite numerous shot attempts at the goal. Captain Jordan Gans (’14) scored the third goal of the quarter, after dodging through opposing players and shooting his infamous 90 mph shot straight into the net. The first quarter ended with the Vikings in the lead, 3-0.

The game slowed in the second quarter; neither team managed to sink the ball in the net. There were many attempted shots from both sides, but the goalies were able to block all of them. Gans was able to take possession from Meno-Atherton multiple times.

“Overall our team played really well,” McCallister said. “[We] gave it [our] all even when we were down.”

The intensified rain paralleled the third quarter as Menlo Atherton managed to score three times, increasing the pressure on Paly. Seligson scored the only goal in the third quarter for the Vikings, helping them keep their lead 4-3.

In the fourth quarter, Menlo Atherton managed to tie the game after netting another goal. However, with the help of numerous saves by Quentin Valenti (’16) and another goal by McCallister, the Vikes stretched ahead again by one point. Although Menlo Atherton had the possession of the ball for the last minute of the game, Paly was able to apply strong defense and prevent them from scoring the another goal. The game ended with the Vikings winning 5-4.

Gans was satisfied with the performance his team put had today, but believes the offense could have been stronger.

“I thought we played really well; especially our goalie had a great game,” Gans said. “Our offense didn’t have a great game. Usually we have over 10 goals but today we didn’t move the ball fast enough after dodging. We won as a team; no one person carried [the game]. I think that is why it was such a big win.”

The Vikings will play their next game on Tuesday at 7 p.m. at Menlo School.