Column: Why the Gunn-Paly Twitter War Was Actually Good for Our Schools – The Viking Magazine

Column: Why the Gunn-Paly Twitter War Was Actually Good for Our Schools 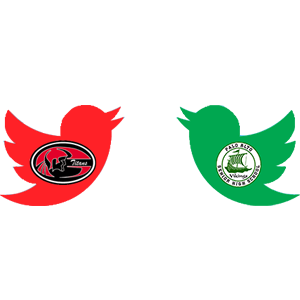 The Twitter-War was sparked by the Paly-Gunn Volleyball game, and has rehashed an old rivalry between the schools.

Well, well, well, what do we have here? If you are not aware, the Palo Alto High School volleyball team lost to the Gunn High School volleyball team in 3 sets during last night’s game at Gunn. By all accounts, it was a hard fought game that ended in an amicable way between both teams and it was a deserved win for the Titans. There were no unfair reffing decisions and no fights. No one was injured due to an aggressive spike to the face. No, the game itself is not what the controversy is about. The controversy is what happened after the game ended, once the word had spread that Gunn had won and reached the ultimate platform for trash-talking: the Twittersphere.

Students from both schools began to pour onto their Twitter accounts to check what happened, and, as school rivalries tend to do, things got heated quickly. Both schools began to actively lash out against each other, commenting on the game first, but soon diving into personal attacks on the student bodies of both schools. While I do not support the attacks, I do believe the volleyball game and the resulting Twitter war was the best thing to have happened to the Paly-Gunn rivalry since the final football game between the schools.

One thing that is not necessary is the amount of hatred between the schools. While a healthy rivalry is beneficial and a beautiful thing, there are moments when boundaries are crossed. Scathing personal attacks commenting on people’s sexual experiences, their appearances, or the deaths of past students is completely deplorable and should be erased from the otherwise healthy rivalry. Despite this, there are some positives. Positive banter should be encouraged and supported. Boasting league records, championships, and athletic achievements is a good way to keep up the rivalries between the schools without escalating into something vile.

There is something uniquely American about a high school rivalry. It has all the traditional hallmarks of what we as Americans value: being proud of who you are and where you’re from, being apart of something greater than yourself and working hard towards becoming greater than you thought you could be. Across the country, high school rivalries can stop whole towns, who pour into football stadiums to celebrate their alma mater’s victories and their rival’s losses. It has been exactly two years and three days since the last Paly-Gunn football game, this one in which the Vikings dominated the Titans and won 48-0. I remember that game quite clearly. It was my sophomore year and I had never been more proud to be called a Viking. That feeling has stuck with me ever since, and it’ll stick with me until the day I die. By taking away arguably the biggest high school games this town has to offer, one takes away a feeling of pride from hundreds of students.

That is why last night’s game was so important: it brought back those feelings of pride to both student bodies. It enhanced our love for the student-athletes that wear both schools’ colors. It made us care about a sport that doesn’t always have the most fans attending its games. It does so many positive things for our schools that not having these games is detrimental to our communities. That is why this rivalry is necessary. It brings the school communities together and makes the bond that exists between students stronger. Those reasons alone are enough justification to bring back the rivalry between Gunn and Paly and to support the banter between these two great schools.

Column: Why the Gunn-Paly Twitter War Was Actually Good for Our Schools