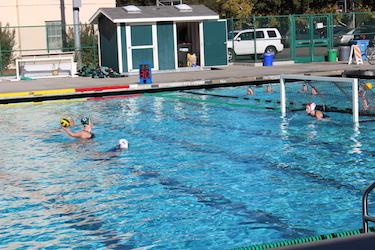 Katie Francis ('16) scores a 5-meter penalty shot against Los Altos. Francis scored the third and final goal of the game, giving the Vikings the victory over the Eagles.

It was a game of two halves for Palo Alto who, after going into halftime down a goal, was able to score 3 goals and secure the victory. With the win, the Lady Vikes moved into third place in the Santa Clara Valley De Anza League standings.

Defense was the order of the day, as both teams’ defense kept the game a low-scoring affair. Los Altos started off the game the stronger of the two teams, keeping goalkeeper Joanna Falla (‘17) busy throughout the first quarter. Team co-captain Olivia Scola (‘15) and Gigi Rojahn (‘16) helped their goalkeeper with a few key blocks of their own. Rojahn also had a shot saved by the Los Altos goalkeeper. Despite the defense from the Vikings, however, the Eagles managed to scored first to take the lead into the second quarter.

The second quarter started with the Vikings on the end of an attacking blitz by the Eagles. Falla kept Palo Alto in contention for the win with the help of the crossbar, as Los Altos hit the outsides of the cage numerous times. Although an offensive push filled with shot attempts at the end of the second quarter helped reassert Palo Alto back into the game, the Lady Vikes were still down a goal at halftime.

Team co-captain Tess van Hulsen (‘15) believed the home advantage helped motivate the Vikings to establish themselves more offensively in the second half.

“We said, ‘our pool, our game’ at halftime and that helped pushed us forward,” van Hulsen said.

In the third quarter, the Vikings were able to find the equalizer through Rojahn, who scored from eight meters away halfway through the quarter. But despite the score being tied and the Vikings continuing to push forward, there were still a few dangerous moments at the back for Palo Alto. Falla, however, was able to block every shot attempt by the Eagles. The sophomore made an athletic save in a one-on-one situation to deflect the ball onto the bar and out of play. With the Lady Vikes on offense, Scola almost scored from six meters out, but the ball was saved off of the line by Los Altos. In spite of the offensive pressure Palo Alto was putting on the Eagles, Los Altos was able to take the lead once again going into the final quarter.

With 6:16 left in the game, Drebin scored a long, cross-cage shot to level the score. She believed her goal gave the team the confidence to take more opportunities on the offensive front for the Vikings.

“It’s nice to score because I haven’t been taking that many shots this year,” Drebin said. “It’s a confidence booster to score in such an important game, and we really needed that since it was such a close game.”

Going into the final four minutes of the game, Palo Alto began to push forward in an attempt to take the lead for the first time. Katie Francis (‘16) earned the Vikings a 5-meter penalty shot in the set position. Francis took the penalty shot and scored, taking Paly into the lead with a score of 3-2.

“I have trained as a goalie, so I knew she would come up big and wait in one side of the [cage] to bait me to shoot into the other,” Francis said. “I was kind of in the goalie’s mind.”

Despite a couple of nail-biting minutes at the end of the game, Palo Alto was able to hold out and to secure its win.

For the Vikings, the comeback victory was a sign that they had progressed since the beginning of the season.

“We had a pretty rough time at the beginning of the season, having a really strong first half and dying in the second,” Drebin said. “We’ve been really finishing our second halves stronger, and that really showed in this game.” 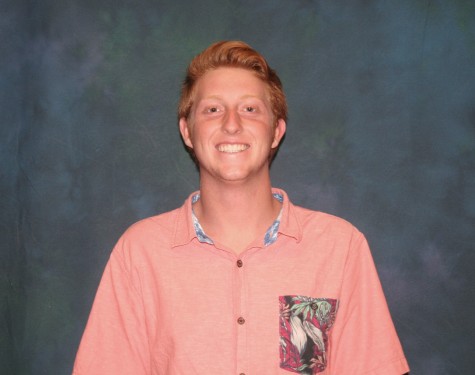 Michael is a senior at Palo Alto High School. He plays baseball for the Vikings.