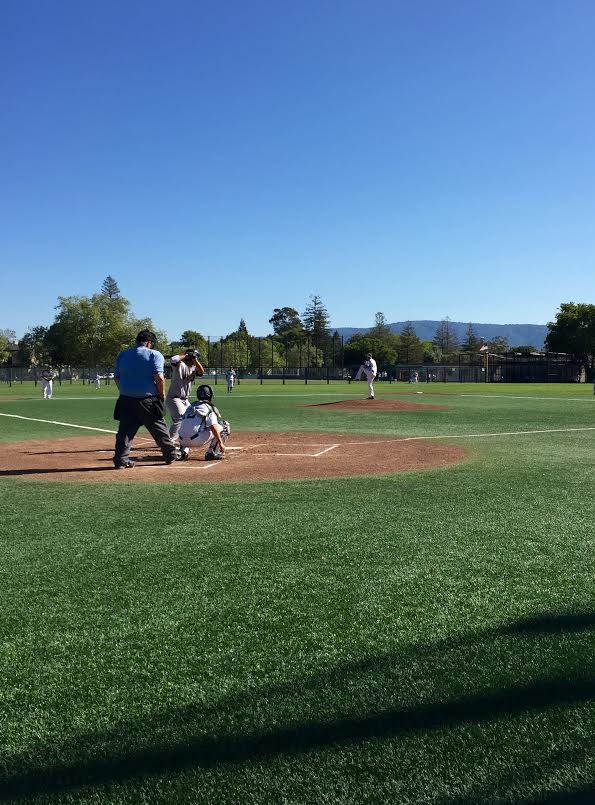 The Chargers started the game with a lead-off single. After making it to second on a bunt, the player was able to steal third. A ball hit to center field was caught by Phil Lewis (’15) for the out, but the Wilcox player tagged up and ran in to score. The Vikings went up to bat, and Lewis hit deep, almost to the fence, and the Wilcox center fielder fell trying to make the catch. However, the Vikings were not able to capitalize on Lewis’s position at second and the inning ended 1-0.

At the top of the second, the Vikings’ starting pitcher Isaac Kasevich (’15) retired three successive batters. Paly then went to bat, and got a run to tie the game 1-1. Lawrence Han (’16) hit a single down the middle of the infield, and Max Jung-Goldberg (’18) followed with a double. Ethan Stern (’17) got the RBI as Han scored.

In the third inning the Chargers hoped to get the lead back, but fell short as Kasevich struck out a batter with a runner at third. In turn, Paly clinched the lead. Lewis started off with his second hit of the game. He stole second, and Justin Hull (’16) hit a single to get Lewis to third. Alec Olmstead (’16) hit a ball directly down the left field line for an RBI as Lewis scored. With runners at first and second, Jack Andrews (’15) got a hit to center field and the Vikings pulled ahead 3-1.

The Vikings stopped Wilcox’s advances in the fourth inning, ending the top of the inning with a double play, but were unable to make anything of Lewis’s lone single at the Vikings’ time at bat.

Kasevich walked two players in the top of the fifth, each at full count and with two outs. But with players at second and third, an out at first kept Paly in the lead. Paly got the bases loaded with one out, but couldn’t get another hit to increase its lead.

Paly lost the lead in the top of the sixth inning. After two outs by center fielder Lewis, the first of which he dove for, Kasevich was replaced by Ryan Chang(’16). Wilcox had players at first and second, and Chang allowed a hit for the bases to be loaded. The next two batters drew walks and the game was tied at 3-3. Niko Lillios (’18) replaced Chang, but gave up a walk and then a hit for Wilcox to take the 5-3 lead. The Vikings finally got the last out at second.

Paly expected the Wilcox offense to be less focused on hits.

“We knew that they don’t really hit the ball that well and they mainly get their runs through bunting and chucking things on the base path, so we were trying to eliminate that part of the game,” Schoeben said. “We needed to throw more strikes than we did today. I think that’s why we lost.”

Lewis got a hit again with the Vikings at bat, but the Chargers didn’t let Paly touch their lead.

In the seventh and final inning, the Chargers got another run with one out. Schoeben dove for a grounder heading for the outfield, and the Vikings capitalized for a double play. The Vikings ended the game with three fly outs, and the final score at 6-3.

“We need to work on games where we play against teams like this,” Schoeben said. “They don’t hit the ball well and we just need to play good defense and throw more strikes.”

Play travels to Wilcox High School to take the team on again, Friday at 4 p.m.