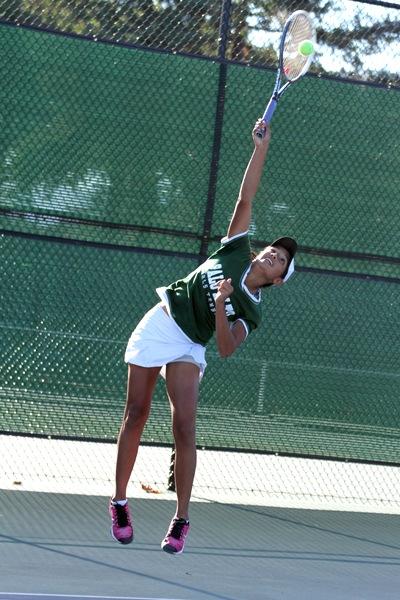 After excelling in the lower division (El Camino League), the girls’ tennis team was voted back into the De Anza League which coach Andy Harader describes as the hardest league in northern central California. So this year will definitely be a challenge for this relatively young girls’ tennis team. Some big name teams in this new league include Saratoga and Monta Vista.

“I have been at Paly for 19 years and the Monta Vista girls team has been NorCal champs about ten times, so that’s pretty impressive,” Coach Andy Harader said.

A key leader on this years team is senior captain Halle Biorn (‘15) who is a doubles player that has been on varsity for three years now. Biorn and the rest of team realize that this year will be an uphill battle, but are willing and excited to take on the challenge.

“Our goal is to win league and make CCS,” Biorn said. “We are going into the upper league, so it should be interesting and new, but it will be fun. I am hoping to bond closer as a team.”

There is lot of young talent on the team that will be taking on a big role this year. This includes key players Avanika Narayan (‘17), Meredith Cummings(‘17), and Mailinh Truong (‘18).

“We are looking good for leadership in the future” Coach Andy Harader said.

The Vikings look forward to getting their season started in early September, where they will be hosting their annual tournament and hoping to start the season on a good note.