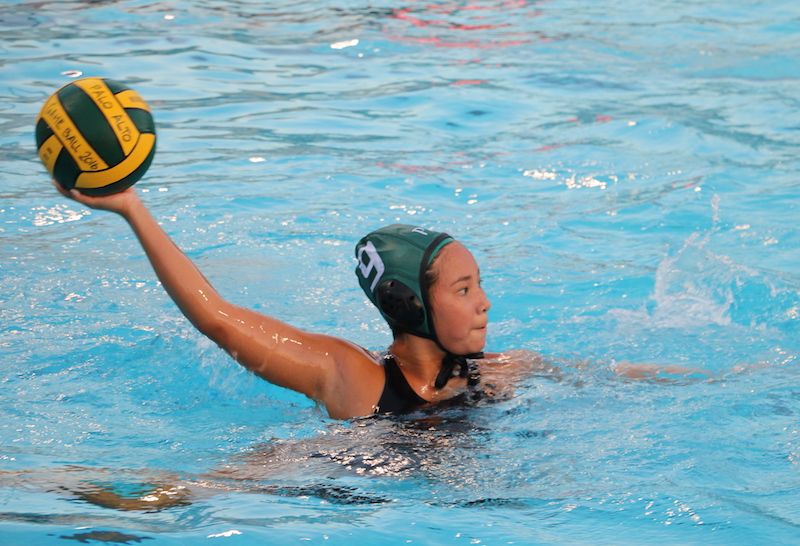 The girls varsity water polo team showed up to play the Mountain View Spartans in what could be the most important game of the year, the home opener. Excited spectators filled the stands at Palo Alto High School on Tuesday evening to watch the game.

After a slow defensive start for the Vikings, coach Doug Stotland was quick to remind the team of the importance of keeping one’s eyes open and alert on defense.

“Coach Stotland brought the team into a huddle and told us that if we want to be competitive, we have to start playing ‘smart’ defense,” Hollie Chiao (‘18) said. Chiao took this message to heart, and responded with two vital steals within the first two minutes of the second quarter.

“They played rough, but we need to be able to take it. This is water polo,” Chiao said.

Offensively, the Vikings struggled to maintain momentum. However, Frick was able to get multiple quick goals from set. Two goals from Frick and one from Talia Stanley (‘18) boosted the Lady Vikes near the end of the fourth quarter. However, the Vikings were never able to fully recover from their slow start. With 40 seconds left in the fourth quarter, Frick saved a lost ball and scored, bringing the final score to 12-7 with the Spartans taking home the victory.

“We did a lot of good things in this game,” Sophie Frick (‘18) said. “But we definitely have a lot to work on in this week’s practices.”

The Lady Vikings head to Los Altos this Thursday for a 3:30 game.