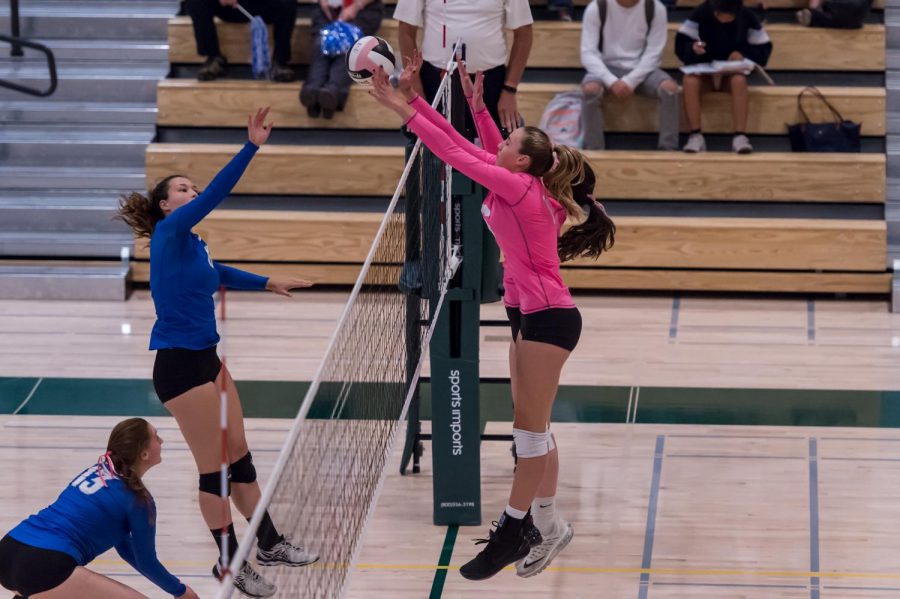 Amelia Gibbs (’18) and her teammate go up for a block.

The Palo Alto Girls Volleyball team defeated the Los Altos Eagles tonight 3-1, in the 6th annual “Dig Pink” game. The teams may have physically faced off against one another, but both played tonight for a common cause, to raise money for breast cancer. All proceeds from tonight’s fundraiser will go to the Slide-Out Foundation, who raises money for breast cancer nation wide through these special “Dig Pink” events.
“I know a couple people on our team have family members that have suffered through cancer so this game has a very special meaning to us” DeeDee Ringwalt (’18) said, “And getting to dress up and have everyone coming out to support us really brings up our energy.”
Mallory Kuppe (19’) set the tone of the game, opening with an ace on the first play. Paly and Los Altos traded spikes in the beginning and tied 5-5 early on. Paly then quickly took control of the first set, excelling on both the offensive and defensive sides of the game. Amelia Gibbs (‘20) contributed multiple points off her consecutive serves, and Isabella Marcus (‘18) was key on the defensive end with some huge blocks. The Vikings won the set comfortably, 25-12.
Los Altos led the second set early on 3-1. Paly struggled to regain their footing, unable to get in their groove, they trailed 6-12 halfway through the set. Paly took two timeouts this set, but that didn’t prove effective. The Vikes were unable to close the gap, ultimately losing the match 18-25.
Both Paly Cheer and Dance performances in support of Paly Volleyball and those affected by Breast Cancer in between the second and third sets.
Paly bounced back in the third set, but not without resistance from the Eagles. The VIkes led 13-11 midway through the set. Neither team let up, and with an illegal substitution by the Vikings the set was tied 15 all. The Vikings struggled abnormally, with multiple serves and spikes falling out. The end of the third was intense for both teams, both tied at 25 after trading point the last multiple rallies. They kept up the trend tying once again at 26, then again at 27. The Vikings finally pulled ahead 28-27, and after an out of bounds spike from the Eagles, took the set 29-27.
Heading into the fourth set, Paly lead 2-1, and with one more win would end the game. Chelsea Fan (18’) sparked the Vikings lead, with multiple huge spikes on her part, putting them up 7-6.
“Going into the fourth set, having the energy of the team behind us really helped and hyped all of us up” Fan said.
Like previous sets this one was tight, both teams continuously trading points, tying the set at 11,13,14, and 15. Avery Wooten (‘18) and DeeDee Ringwalt (‘18) were both key players, landing their spikes at crucial times. In the end the Vikes won the fourth set 25-20, consequently winning them the game 3-1.
The Vikings are now 9-0 in league, and have retained their undefeated status. They look to keep it that way as they go up against Monta Vista this Thursday, away at 6:45.