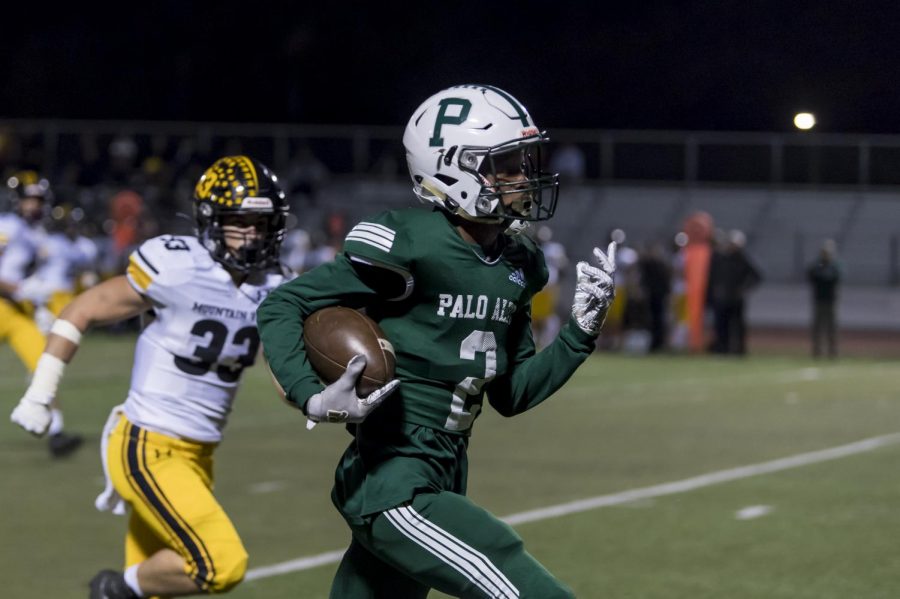 With around nine minutes remaining in the first quarter, Junacio Henley (‘20) scored a 62 yard touchdown off a punt return. The game didn’t get much closer than that for the remaining 39 minutes, as the Vikings routed Mountain View 36-7 on Homecoming night.

The touchdown, which was quickly followed by a two-point conversion from Kevin Cullen (‘20) to Louis Pasarello (‘20), set the tone on a night where crowd support already reaches higher intensity than most games. Beginning the game in dominant fashion only served to spur on the crowd.

“Homecoming definitely creates a special atmosphere with more energy and excitement,” Creighton Morgenfeld (‘20) said. “We really appreciate all of the fans that come out for [the] game and contribute to that atmosphere.”

The fan support wasn’t undeserved. On one drive in the first quarter, Paly recorded four first downs, a testament to an offense whose conversion rate, even when facing third-and-long, held strong. Paly’s defense, however, seemed to falter for a moment–one of Julian Daniels, one of Mountain View’s junior running backs, scored a touchdown to bring the score to 8-7–but the moment was brief. That touchdown remained the sole points on the scoreboard for the Spartans: in 47 minutes, the Vikings held Mountain View to zero points scored.

And the old saying, that defense turns into offense, rang true. Not one to shy away from high-pressure moments, Paly went for it on 4th and 5. The risk paid off–Danny Peters, sophomore quarterback, connected with Jamir Shepard for an 11-yard pass. That was a connection that proved itself the play directly after, when Peters found Shepard for a 34-yard touchdown to bring the score to 15-7.

The game was an exhibition of Peters’ arm. Of his four touchdowns, all were thrown for more than 30 yards: 34, 38, 42, and an 80-yard-touchdown in the third to Colin Giffen (‘20) showed just how thoroughly the VIkings had dismantled the Spartans defense.

Although the game seemingly went off without a hitch–the Vikings maintained their third-place spot in the De Anza league without too much difficulty–it was not won without casualties. Henley went down with an injury, and for a Viking team reliant on their receivers in a game where Mountain View stifled the run game, the loss could have been a fatal one. But the Vikings ensured that it wasn’t.

“Losing a great playmaker like Junacio is a big blow for any team,” Morgenfeld said. “But our ability for other players to step up and replace his explosiveness on offense and lock-down coverage on defense allowed us to continue the game without a large drop in level of play.”

That ability will be challenged in coming weeks, when Henley’s availability will be up in the air and Shepard is unlikely to suit up. But Paly football has been nothing if not resilient, and this win after a disappointing loss to Los Gatos is proof of that resilience. It’ll be tested again next week on Friday at Milpitas at 7:00 p.m.