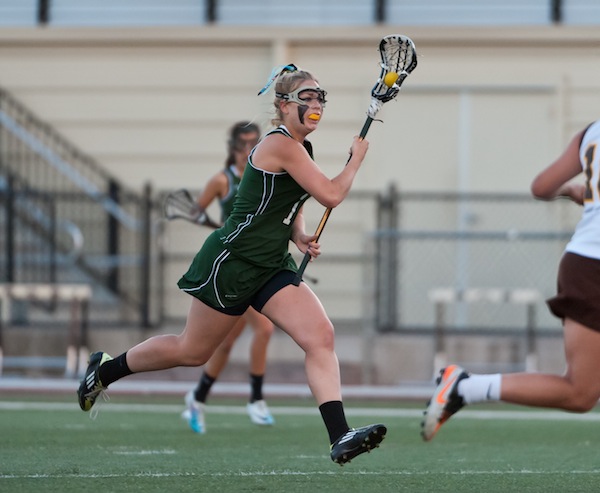 Kimmie Flather ('12) drives up the field. Photo by Grant Shorin

As the sun set on Los Altos tonight, the Palo Alto High School girls’ lacrosse team faced off against St. Francis High School in the Santa Clara Valley Athletic League (SCVAL) semifinal and once the orange sky gave way to a starry night and the summery temperatures had cooled down, the Lady Vikes had fallen short, losing 20-9.

It was the second straight year the Vikings had their season ended by the Lancers. 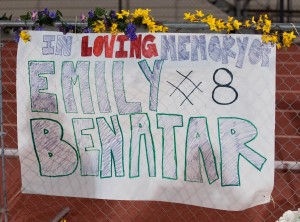 The team made signs like this one that hung behind the team's bench to commemorate Emily Benatar in the light of her passing. photo by Grant Shorin

The loss, while devastating to the girls who had fought so hard for a playoff berth and a shot at redemption against the Lancers,  after they were forced to vacate six of their SCVAL wins this season as a result of a Central Coast Section (CCS) rules violation, was overshadowed by what had happened earlier today.

More than the score of the game, more than another chance at a championship season, the team lost a former teammate and above all, a friend.  Emily Benatar (’11), co-captain of the 2010-2011 Lady Vikes team, died this morning of bacterial meningitis. Benatar graduated from Paly last year and was a freshman at Washington University in St. Louis. She was 18.

Despite the day’s events, the Lady Vikes were able to keep St. Francis in their sights throughout the first half of play.

After getting down three goals to none in just under six minutes, Paly roared back with scoring chances galore. In one such opportunity, midfielder Kimmie Flather (’12) dodged in and out of several St. Francis defenders, zigzagging her way to the goal only to have her shot hit the post.

The rebound however, was promptly scooped up by midfielder Charlotte Biffar (’13), who was fouled on her shot. Taking advantage of the penalty, Biffar buried the ball in the net, giving Paly its first goal of the game and sending the conspicuously large Paly crowd into cheers.

“[The crowd] helped so much tonight to keep [the girls] motivated and focused,” Nesbitt said. “They didn’t give up till the last second.”

Paly students show their support for the girls and hold up a sign that reads "Paly Strong." photo by Grant Shorin

The next face-off led to a St. Francis rush penetrating deep in the Palo Alto territory but goalie Emma Beckstrom (’12) had other ideas. With a throng of players in her face and at her feet, Beckstrom held strong, including stopping a would-be goal on a penalty shot. Beckstrom also jumpstarted one of the best Paly clears of the night, something the Lady Vikes struggled at all game. With a long pass up the field, Beckstrom found midfielder Emy Kelty (’12), who squeezed through a pair of defenders as she sprinted towards the crease and rocketed a shot into the top right corner of the net.

St. Francis, living up to its No. 1 seed status, scored three more times before Paly was able to find the net again. A pair of goals from Flather and two more from the Lancers made the score at halftime 8-4, in favor of St. Francis.

The break in play gave way to a wave of brown and gold and four consecutive Lancer goals. Attacker Layla Memar (’12) was able to break up the streak by finding the back of the net after a sustained possession by the Lady Vikes. Memar attributes the Lady Vikes’ second half collapse to a break in concentration and numerous mental mistakes.

“Mentally, I think we could’ve used our excitement to drive us in a smart way but rather we got kind of scrambled,” Memar said. “We were a little frantic.”

Biffar followed with her second goal of the night, but with only seven minutes remaining, the game was quickly becoming out of reach. The Lancers refused to surrender their comfortable lead, responding to every Viking goal with one of their own.  When all was said and done and the final buzzer had sounded, the Vikes had fallen 20-9. 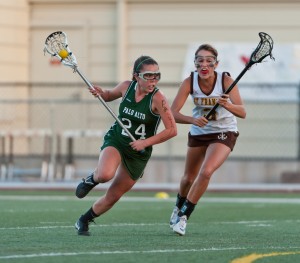 Emy Kelty ('12) navigates around a Lancer defender. This was the last game of the senior's illustrious Paly lacrosse career. photo by Grant Shorin

Rather than dwelling on the loss though, Nesbitt chose to focus more on the season as a whole and the new perspective that she hoped her team would leave with.

“There are things bigger than this game,” she said. “They’re a classy, mature group of young ladies and I’m absolutely so proud to coach them. We had our challenges along the way… [but] I think this is the closest group [of girls] I’ve ever had.”

“What we’re going to take away from this season is more about the friendships that we’ve made rather than the individual games.”