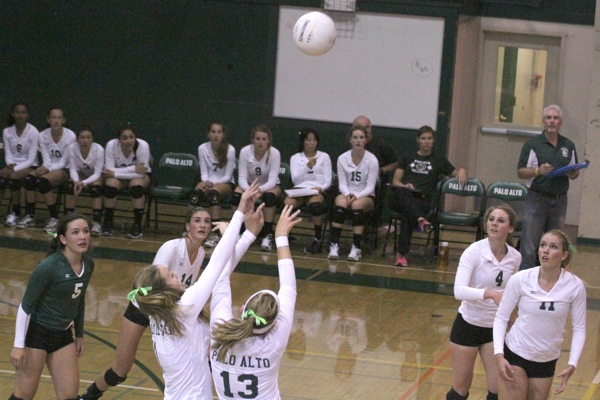 Expectations are high for this year’s Paly volleyball team, which is coming off six consecutive league titles and back to back state championships.  In addition to the expectations of continued glory, the team will face challenges adjusting to a number of new faces in the locker room.

“We are not as strong as last year because we lost a lot of good players,” captain Sophia Bono (‘13) said.

This year’s team is made up of six returning players and 10 players new to the varsity level. The squad is missing eight players who graduated last year after winning their second state championship.

The team is feeling the absence of these former players, including Melanie Wade (‘12), Maddie Kuppe (‘12) and Kimmy Whitson (‘12), who were on the team for four, four and three years, respectively.

“Obviously, it’s going to be a challenge this year for everyone who is new to the team to find out what their roles are going to be,” coach Dave Winn said. “In the past, we had the luxury to have a lot of returners [who] knew their roles coming into the season.”

Anna Dukovic (’15) is one of the many players enjoying their first season on the team and is feeling the pressure of replacing the former members of the team.

“As a newcomer it is nerve-wracking and at times I feel like I am letting people down with my mistakes,” Dukovic said.

Nevertheless,  Bono and Shelby Knowles (‘13), the team’s captains, are rising to the occasion by helping out the new players who are still learning to adapt to the speed of an intense varsity volleyball game.

“We are going to have to have people who are new to varsity get used to the speed of the game [and the] the level of the opponents as quickly as possible,” Winn said.

And although the team has greatly transformed, Winn still believes in his players.

“Every year, I set very high expectations for the team and that doesn’t change,” Winn said. “It doesn’t matter who I have on a team, we always want to be the most improved team we can be from the beginning to the end of the season.”

The goals for the team will remain the same, as they have for the past couple of years.

“We stay focused on the present, we learn, we try to keep getting better and try to keep the intensity and competition high in practice every day,” Winn said.

Returning starters from last year’s team, which include Knowles, Becca Raffel (‘14) and Keri Gee (‘14) are showing potential for the upcoming season.

On Tuesday night, the Lady Vikes defeated Notre Dame in their first game. Knowles, Raffel and Gee all displayed their talents on the court.  Knowles and Raffel both finished the game with nine kills and all three players had multiple digs.

The Lady Vikes will take the court next on Thursday to face Leland High School at 6:30pm.