Wrestling with tradition – The Viking Magazine 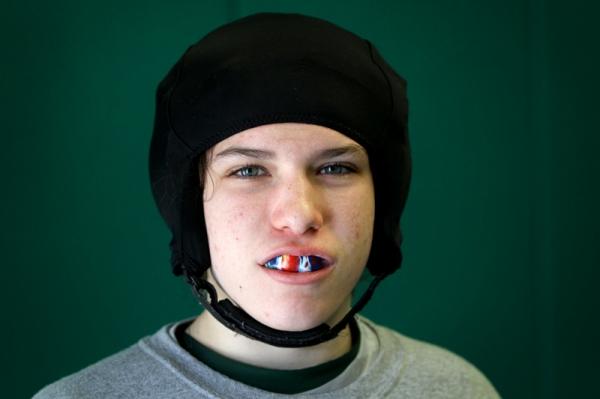 Alexa Austin ('15) is the second female ever to join the Paly wrestling team. Austin is beginning second season on the team.

Since the ancient Olympic games began in 708 BC and then resumed in 1896, only males represented their countries. While women eventually earned the right to compete at the Olympic level, it wasn’t until the 2004 summer games they appeared on the wrestling mat.

In Palo Alto, this year, coach Dave Duran’s Palo Alto High School wrestling team will include its second female athlete on the team ever.

Wrestling differs from other sports because a wrestler competes with others based on their weight rather than gender. This makes the sport indiscriminate.

“One thing about wrestling is its equal opportunity, so if they are in the room with their shoes on, it’s all the same,” Duran said.

Cadence Lee (‘14), a female wrestler at Gunn High School has not only been one of the few girls on her team since freshman year, but one of the best in the country. Lee won the North Dakota tournament last year and the Florida National tournament twice which qualified her go to the World Championship last year.

“This past year I also went to Serbia to compete,” Lee said.

Despite numerous accolades, Lee’s prevailing triumph was not achieved without hardship. Athletes often seek strength and support from fellow teammates, however, the social aspect of athletics can be quite different when facing them as the odd girl out. Without the support from the community it is difficult for any athlete to thrive.

This was far from the case for Paly female wrestler Alexa Austin (‘15).

“During matches if I was ever falling behind my teammates would cheer for me,” Austin said. “At tournaments I would have five people over in my corner coaching me. They were all really supportive. They were just excited to have someone else on the team.”

Because of the way society characterizes certain sports, it’s difficult for women to participate in such a gender-restricted activity. Both girls and boys have experienced difficulties in accepting the change in the sport. For the athletes at Paly there is no question of equality.

“I feel like it’s a good thing that girls are wrestling, it is not just meant for guys, it doesn’t change the dynamic of the team, we welcome in any newcomer, even if it is a girl,” varsity wrestler James Giacca (‘14) said.

Although it took 108 years for the Olympics to add women’s wrestling, there has been undeniable progression in the sport.

For the past few years most of the publicized wrestling matches have emanated from the World Wrestling Entertainment (WWE).

The WWE has built a franchise with the professional woman wrestlers, who bring in millions of dollars in revenue yearly. Women dress in promiscuous clothing with predetermined outcomes of the matches and entertain an audience. Pop culture present a sexualized connotation of women in the sport, and viewer’s ratings indicate that people love watching it.

Recently, professional women’s boxing has also become widely popular and successful. Both have started from a kid most likely being the only girl on the team following a passion and dream.

In Palo Alto, neither of the public high schools have enough girls to have separate teams, so they practice together. While there still isn’t enough girl participation to warrant an entirely female team at the high school level, with continued interest from the wrestling community there is an opportunity to change this reality in the near future.

“Originally a lot of people would think that girls cannot compete with guys and don’t consider it a legitimate sport,” Austin said,  “but I think it’s starting to change.” <<<