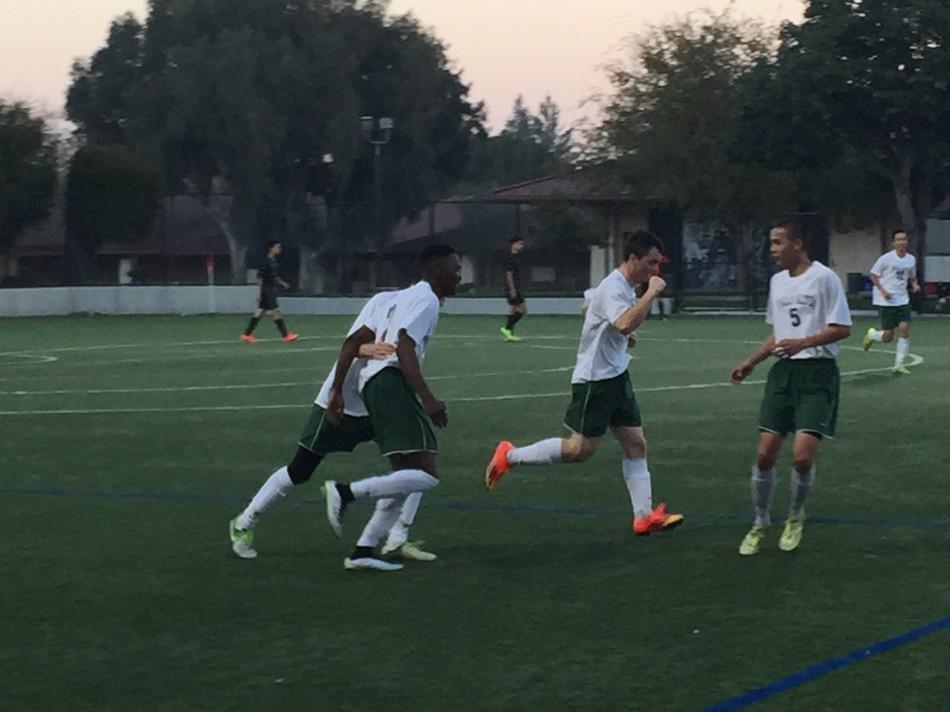 Dami Bolarinwa (’15) celebrates with his teammates after scoring late in the game. Bolarinwa’s goal put the Vikings up 3-0, winning the game.

Edward Chen (‘15), Brian Tracy (‘17) and Dami Bolarinwa (‘16) all scored goals in the win in front of a bleacher section packed with Paly and Gunn fans alike. Given the local opponent, the victory was especially sweet for the team.

“It feels really good beating a hometown rival,” Assistant Coach Amir Malekpour said. “It was a tough game, it wasn’t easy at all actually. The guys really busted hard and came up with a win against a great team. Hats off to the players and coaches.”

The game started off with a few scoring opportunities for both teams. Paly delivered a few crosses into the box on one end while Gunn sent a couple of free kicks into the box on the other. Neither team scored, however, until an Ariya Momeny (‘16) shot was deflected by the Gunn goalie and Chen scored off the rebound 29 minutes into the first half.

In the second half, Gunn had more chances to score in the form of four corner kicks but was unable to convert any. The game remained close until the end when Chen fired a shot off the crossbar and Tracy tapped in the rebound 34 minutes in. Five minutes later, Bolarinwa, who had missed a diving header earlier in the half, headed in a corner kick from Wesley Woo (‘15).

Despite the highlights from Paly’s offense, Chen credited the win to strong defensive play.

“We have to give a lot of credit to our back line defending it especially Derek Schoenberger (‘17)” Chen said. “He has had one of the best changes from last year to this year and has really held his own.”

Looking forward, the team will begin league play this Thursday against Los Altos at 3:30 at Paly. With only one day of practice time beforehand, Malekpour knows what the teams needs to work on.

“We get good chances but we just need to execute them more,” Malekpour said. “Execute and talk more – be more communicative on the field.