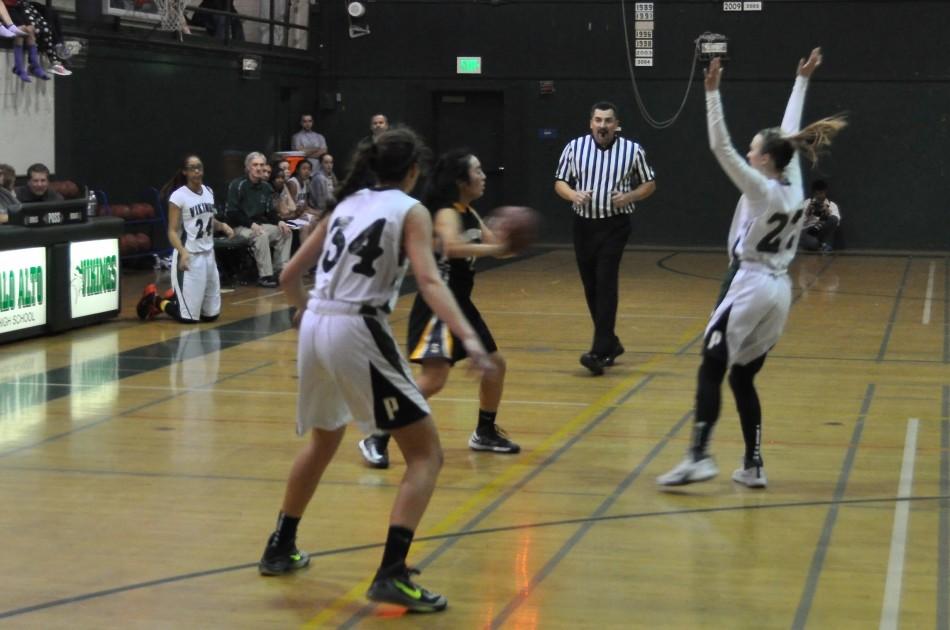 On Friday night, girls’ basketball triumphed over Mountain View 53-40. The Vikings’ win secured their fifth league win and they have remained undefeated. Tonight’s performance was a big team win and the Lady Vikes were happy with their performance.

“I was very proud of our team, shots weren’t falling, but we got offensive rebounds,” Coach Scott Peters said.

The game started off strong for the Vikings with Coco Lovely (‘16) scoring the first points of the game 35 seconds into the game. Lauren Koyama (‘17) then followed up with a three-pointer to bring the Vikings to an early 5-0 lead. Mountain View put up their first point with a successful free throw. Following a foul, Lovely made a free throw bringing the score to 6-1. The Spartans then scored to bring score to 6-3 with 5:43 left in the first quarter. Following an unsuccessful three point attempt by Koyama, Skylar Burris (‘17) made the rebound to bring the Lady Vikes lead to 8-3. Mountain View then picked up speed as they gained the lead to bring the score to 13-8 at the end of the first quarter.

The Vikings improved from their first half performance over the Spartans in the second half where they put up 30 points in total over Mountain View’s 18 points.

“The first half was kind of rough, but we definitely picked it up in the second half and started to drive it harder into the basket,” Lovely said.

The third quarter was especially strong for shooting guard Koyama, who put up seven points for the Vikings. Leong and Maddy Atwater (‘16) also contributed to keeping the Vikings lead at 36-34 over the Spartans.

In the final quarter Lovely put up seven points for the Viking, Atwater six points, and Koyama and Leong two points each. The Spartans scored four points against the Vikings’ 17 points to give the Vikings the victory 53-40.

“In the second half the difference was our execution. We were calm and we played our game well,” Peters said.

The Lady Vikes look forward to staying strong throughout the season and competing for a top spot in leagues.

“We are hoping to go on undefeated in leagues,” Koyama said.

The Vikings will play on the road next Wednesday, Jan. 27 against the Los Gatos Wildcats at 7 P.M.

“We held home court against Mountain View who was undefeated, it now puts us in a great spot for going on the road to Los Gatos to get that win,” Peters said.