Circling the podiums – The Viking Magazine 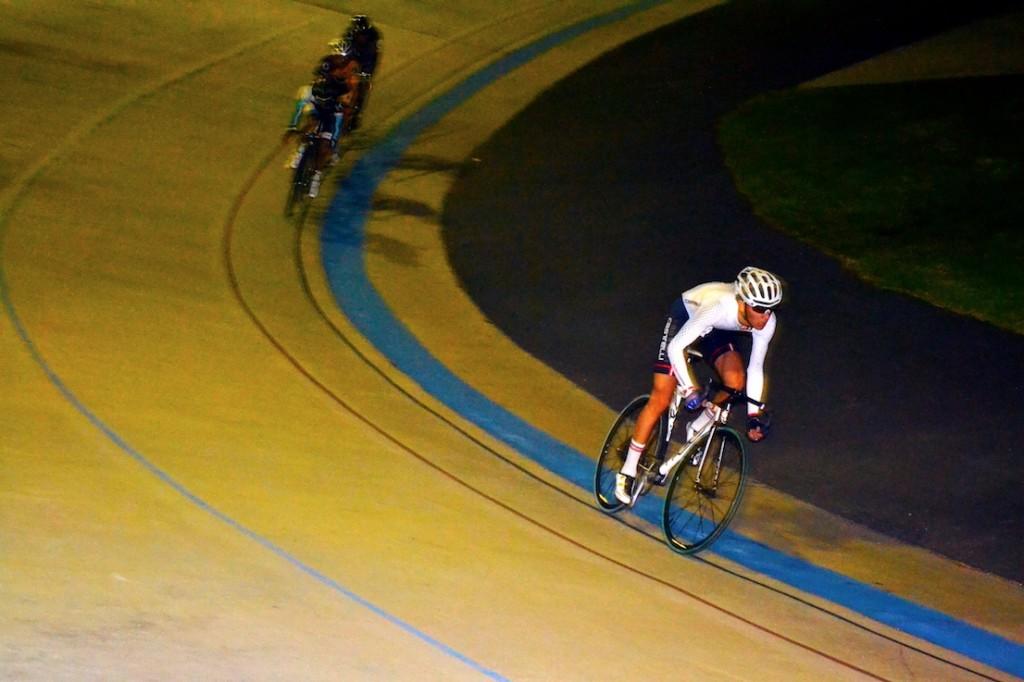 Raul Arias (‘14) chooses to race competitively in track cycling over team sports offered by Paly. Arias has competed in both the Junior Nationals and the Juniors Track World Championships.

Who will be Paly’s next Olympian? An obvious response for many people wondering this question would be to scour Paly’s numerous sports teams for big name athletes, or to look on prestigious local club teams for Paly students. The answer, though, may lie in a far less obvious and somewhat unexpected location. The answer to this question lies in Raul Arias (‘14).

Arias is a track cyclist. Like track runners, track cyclists race around an oval for various distances with certain rules that guide them. Although the sport is less well known than many others, Arias’ success in it could take him to the Olympics.

This past summer, Arias competed at the Junior Nationals, taking first in the points race. The points race consists of around 60 laps, depending on the size of the course, and takes around 30 minutes to complete. Points are given to the top four riders every ten laps during sprint laps and are also awarded to any rider who manages to get a lap ahead of the main group of competitors. The person with the most points at the end of the race wins. Arias additionally placed second in the scratch race, another name for a basic race where the person who finishes first wins. Finally, Arias placed fourth in the omnium, an event that totals the point scores from six different races.

Arias’ success at Junior Nationals took him all the way across the Atlantic Ocean with the U.S. national team to the Juniors Track World Championships in Glasgow, Scotland. The Juniors Track World Championships, held once a year, are the amateur equivalent to the Olympics. Although Arias did not win anything in Glasgow, participation there signifies good things to come.

“Every year that he rides until he’s 25 he’s going to get significantly stronger,” Arias’ coach David McCook said. “He’s going to get a lot stronger and a lot more race experience. Overall, I think he has a really good shot at going to the Olympics.”

The surprising part about Arias’ success is that he has only been track cycling for two years. This seemingly impossible rise to the top, however, was set up by years of cycling growing up.

“He first started riding around the neighborhood,” Fabiola Arias-Lopez, Arias’ mother, said. “Then he got really into it and started doing real races.

Although Arias started riding a bike at a young age, it took him a while to find passion. Before he ever started track cycling, Arias rode a fixie, or a fixed gear bike. A free wheel on regular bikes allows the rider to coast without pedaling, but on fixies, the pedals are moving at all times.

In addition to riding a fixie, Arias also rode BMX, mountain biked and participated in what he called street races. The races took place throughout a few different cities and tested a participant’s riding skills as well as their problem solving.

For Arias, street racing only encompassed about a year. Much of his early riding consisted of riding with his friends in the foothills of the Santa Cruz Mountains. It was during one of these rides that Arias was told about track cycling by professional road rider Martin Acosta.

“He [said], ‘Man, you should start racing track…On Tuesday I’ll take you to watch,’” Arias said. “I went, and I liked it”

After that day, Arias’ cycling career was never the same. While watching races, he met a few guys at the track who persuaded him to join the San Jose Bicycle Club. That was two years ago, and every since, Arias has been training, racing and making a name for himself as a junior cyclist. Arias’ weekdays are filled with cycling. Practices and races encompass nearly every day of the week.

Besides a race on Wednesday or Friday of most weeks, Arias uses almost every other day for training purposes. Training constitutes a few different routines. Mondays are often easy rides or rest days, but Tuesdays and Thursdays are spent at the track. On the weekends, Arias goes on long rides of six or seven hours in the foothills. When races approach, motorpacing becomes a key part of training. Motorpacing consists of Arias keeping pace with a motorcycle going at race pace or slightly above for spans of 10-15 minutes. This simulates racing and prepares Arias for the actual competitions.

After practicing, Arias heads home. With long sessions of his day taken up by cycling, fitting in everything else is often difficult.

“I train for four hours, come home pretty late, eat and try to do my homework,” Arias said. “Sometimes I don’t finish it because I’m tired from training”

Arias’ mom agreed that her son has a busy schedule. She noted that he often does not have time to hang out with friends. Additionally, she mentioned the changes that Arias’ cycling career make to her family’s life.

“This is something new for our family,” Arias-Lopez said.  “It’s more busy when we’re going here and there to different places, but it can be exciting and fun,”

While Arias enjoys the experience even more than his family, track cycling also serves a restorative purpose. School, family and friends may sometimes put stress on Arias’ life, but cycling has always been an outlet for him to get away from his problems.

“[When I’m riding], every stress and everything I’m going through just goes away,” Arias said. “I’m in my own little world up in the mountains. I just feel free.”

With many high school students trying to find ways to keep their stress levels down, Arias seems to have his locked down completely. This love of riding translates to racing, where Arias uses his intense desire to win and love for the sport to fuel himself.

According to McCook, Arias’ greatest weakness is overall physical strength. Since Arias has been training for a mere two years, other cyclists currently have an advantage over him in this aspect. The good thing about this weakness, though, unlike many others, is that training can solve it single handedly. Arias’ mental composure, on the other hand, is much more difficult to learn.

“He is very strong hearted,” McCook said. “In order to push yourself as hard as you need to, you have to have that will to win, and he definitely has that.”

Arias’ will to win should keep him on track for the rest of his cycling career. Where he goes with his talents, only time will tell, but one thing is certain: With the Olympics coming up in three years, Paly’s next Olympian may be racing towards the spotlight.