The Silver Lining – The Viking Magazine 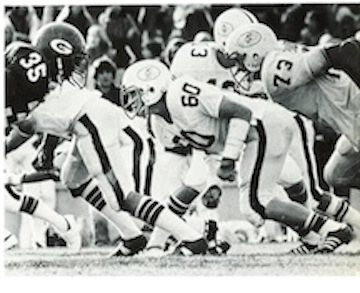 Steve Silver ('78) playing against Gunn. The Vikings would go on to win the City Championship in 1978.

Looking around the walls of the weight room, anyone would find things they would expect in a gym: posters detailing the perfect technique for doing shoulder presses, the names of some recent and not-so-recent students who have benched about 300 pounds, even mirrors for spotting the flaw in your bicep curl. But a certain plaque has a bigger story behind it. A story that has meaning and purpose. A story that remembers things that have since long passed by, a story that one would not know unless they stopped and read the plaque. Underneath the buildup of dust, they can make out the words: Captain Steve Silver.

“We grew up in Crescent Park together, we went to Crescent Park Elementary,” Gullixson said. “I knew Steve, probably since kindergarten.”

Going to the same schools since you were five allows you to learn how people change over time: how their friends change, how they change, how their interests change. But for Steve, it was always about sports.

Before iPads or PS3s were the go-to source of entertainment, kids filled their days with fierce competition in sport. Silver, Gullixson and the rest of their friends in their neighborhood were no exception.

“What I remember the most is that we would ride around Saturday and knock on friends’ doors to go to play a baseball or basketball game and Steve was always eager to come out,” Gullixson said. “We spent a lot of time outdoors.”

Silver’s love of sports first came to fruition in 1971, when he, Gullixson and the other boys from the Crescent Park neighborhood won the Pacific Coast League Little League Championship. It would be something that had a lasting impact on all of the boys on the team, especially Silver.

“Steve was always a terrific athlete…Steve played third base mostly as I remember, which was his personality,” Gullixson said. “When playing sports, he always wanted to be in the thick of things.”

Eventually, the Crescent Park boys grew up and found themselves at Paly. They were older, but their love of sports remained. They still enjoyed the thrill of sliding into second in a plume of dust, dribbling on concrete courts until their hands were black with dirt and tossing last-second game-winning touchdowns to each other.

Silver played varsity football in 1978. He was still in the thick of action, and, according to Gullixson, he was someone you would not want to play against.

“He was not the biggest linemen, but he was very competitive,” Gullixson said. “He was the nicest guy in the world, but when you got him on the field, he was a tough competitor.”

After 1978, the Crescent Park men went their separate ways. Many headed off to college, Silver, however, would join the Air Force.

“ I was very proud of him when I heard he became a pilot,” Gullixson said. “He was always willing to take on new adventures. Steve never wanted to be afraid to try something new. That’s something I admired about him.”

As the years wore on, the men all wanted to meet up. They wanted to share the good memories that they had with each other and catch up. By then, Silver was out of the military and had become a flight instructor.

He was still an avid athlete, and had become a biathlete. Naturally, what brought together all of his friends was their love of sports. He sent out mail to all of his Crescent Park friends, inviting them to play a game of touch football. They would play during the holiday season, when they came back to Palo Alto to visit their family. Year after year he sent out mail, and year after year his friends came.

They continued to play the annual game until 1991, when the unthinkable happened. Silver was flying to Tahoe, attempting to teach yet another student how to fly. Little did he know this would be his last flight ever. Silver and his co-pilot crashed.

“It was devastating for everybody involved,” Paly football coach Earl Hansen said.

Silver’s family and friends wanted something to remember him by. His entire life had revolved around sports and living life to the fullest, so it was fitting when those who knew Steve donated gym equipment to Paly. Gullixson believed it was the right thing to do.

“My senior year, he was always in the weight room,“ Gullixson said. “He did everything he could to improve his strength.”

Silver’s friends still play the annual football game, but it is now named the Silver Bowl. It is an appropriate name, reminding the players of who inspired them to play back when they were ten.

The gym equipment is still there, though those who use it do not know where it came from. Charlie Stephenson (‘16) and Zach Kirk (‘16) both use the equipment, but when asked if they knew who Steve Silver was, they both replied: “No”.

Maybe it’s fitting, in today’s world where professional athlete’s demand multi-million dollar contracts and are expected to appear at red-carpet events, Silver’s pure love for sport is a refreshing reminder of why we play sports: because it is what we love. And that’s important, because he still inspires his friends and family today, who carry a piece of Silver with them.

“He was never in a bad mood and he always had a smile,” Gullixson said. “I never had anything bad to say about Steve. I wish that I could grow old with him.” <<<