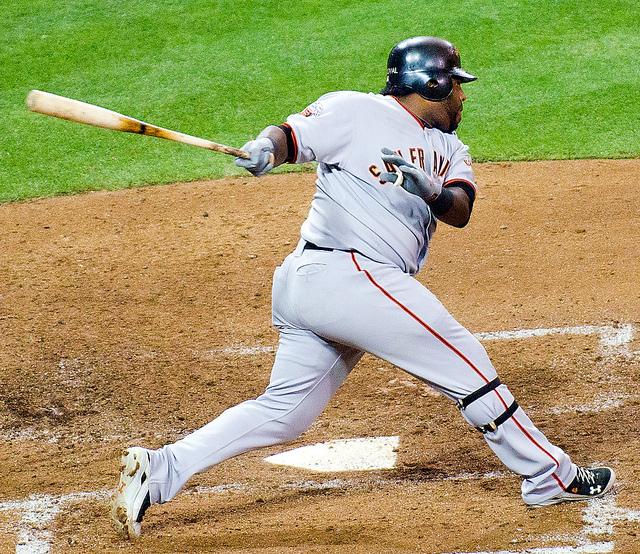 Pablo Sandoval went 3-4 for the San Francisco Giants during game four of the NLDS against the Cincinnati Reds.

October is a month full of many great things: Halloween, Paly Spirit Week, homecoming and college football. But greatest of all, October means the MLB (Major League Baseball) postseason. For the San Francisco Giants and their fans, this means one thing: #OrangeOctober.

“Together We’re Giant” has been the motto for the Giants throughout the 2012 season, and now, during the postseason, it’s time to show just how giant we are. So far, the National League Divisional Series (NLDS) has been nail-biting, nerve wracking and overall torture. I’m not going to lie, after the 9-0 loss to the Cincinnati Reds at home in the second game of the series, I was worried. I asked myself, could the Giants win three straight games away? Yes. But is that likely? No. But, we’re talking about the Giants, and this is just how they do it.

Game three of the series was won mostly by luck (and errors on the Reds’ part), but I had an inkling that game four would be different. And guess what? I was right (as always). Right off the bat (literally), Angel Pagan (or #PaGONE) hit a leadoff homer, setting the tone for the rest of the game. Later, in the second, Gregor Blanco hit a two-run homer, and after just two innings the Giants had more hits in game four as they did in games one, two and three combined.

In the seventh inning, after Joaquin Arias hit his second double of the game (the first coming in the fifth), Maaarcooooooo Scutarrooooooooo hit a double, to bring him in. Next up: Panda (Pablo Sandoval). Can I get a #ByeByeBaby? Panda hits a two-run homer that goes way, way out of the ballpark. It was definitely a splash hit, to say the least. The Gigantes ended up winning 8-3, which takes this series to a fifth game.

So here we go. These are my three reasons for why the San Francisco Giants are going to win game five:

1. Momentum. After winning two straight games on the road, there is no doubt that the Giants are going to come out tomorrow ready to rumble.
2. Pitchers. Though Matt Cain had a rough first game this series, he is the Giants’ most reliable pitcher (let’s not forget his perfect game). On top of that, since Tim Lincecum pitched today in place of many relievers, almost all of the Giants’ relievers had a break and can step in at any time, if necessary.
3. Advantage. The Cincinnati Reds have not won a home playoff game in 17 years.

Though the Reds have the home field advantage and haven’t lost three straight games at home all season, and no team has ever recovered from a 2-0 deficit in a five game series by winning three games on the road, I’m faithful in the Giants! Plus, there’s a first time for everything! Let’s just hope tomorrow is a day full of firsts to the Giants’ advantage.

What is Giants baseball without torture? And that’s what #OrangeOctober is all about. “Together We’re GIANT.”