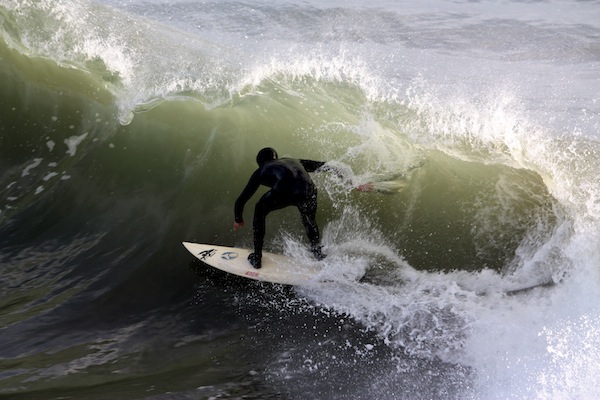 The Palo Alto High School athletics community is notorious for its high pressure, stressful environment, and overly involved “tiger” parents.  With many of them CEO’s, lawyers, and venture capitalists, politics are not uncommon when it comes to youth sports.  With a tunnel-vision of success, athletes are driven by expectations and the fear of failure to follow a strict plan of achievement, serving particular ambitions.

Less than 50 miles away, the Santa Cruz surf culture has a completely different vibe.  While the average Paly athlete is constantly guided by parents and coaches to reach the next level, surfers are independent.  In order to succeed, they become self-motivated, practicing and improving individually.  Surf parents don’t make waves for their children.  All their kids need is an ocean, a board, and a swell.

“In an individualized sport like this, it’s on you to practice and perform your best,”

While some surfers compete at a high school, collegiate, or professional level, the number of them is very low.  Most surfers don’t surf for stats or money, but instead for the enjoyment it provides.

“It’s the whole being in the ocean– being in a whole different atmosphere. [There’s] no feeling like it,” Paly Alumnus Gaston Bolaños (‘11) said.   “And then when you ride a wave it’s like you are walking on the water.  Nothing compares.”

Even though the ride is enjoyed individually, surfers often feel themselves as part of an intimate community.  For many, the sport not only influences their athletic lives but alters the way they talk, the clothes they wear (or choose not to), the music they listen to, who they spend time with, how they party, the hours they are willing to work and the days they call in “sick.”

Gary Buthman, 60, a father of two passionate surfers, has watched his sons and their peers grow up in Santa Cruz, a town that embraces the surfing community and its cultural values.

Affecting people and places in ways that other sports do not, surfing is more than just a sport for many of its participants.

“I love surfing because it’s a lifestyle,” Carpenter said. “It defines who you are day to day.  It affects your mood for the course of the day.”

In towns like Santa Cruz, where surfing influences many aspects of the neighborhoods, a day without a swell can alter the mood of the community.

“Santa Cruz is pretty surf crazy,” Ryan Halpin, 30, Santa Cruz local and Rip Curl surf shop employee said.  “Everyone is stoked when the waves are up and everyone is bored and moody when there are no waves.”

They live to a rhythm that is out of their control: the rhythm of the swells.  Surfers don’t stare at the same turf on inflexible schedules, repeatedly practicing and competing in the same environment.  They must accept their place at the mercy of mother nature.

“Pretty much every other sport is repetitive and predictable,” Carpenter said.  “[In surfing] everything is dependent on the environment, and that environment is forever changing.”

Surfers don’t have the ability to determine the schedule of the waves.  Because they can’t reserve private courts and fields in specific time slots, surfers learn to share the ocean.

Kalā (kah-lay) Buthman, 16, Gary’s younger son, surfs for Soquel High School on the east side of Santa Cruz.  He feels that there is an increasingly strong surfing community in Santa Cruz that has developed based on the growing popularity of the sport.

“There are a lot of [surfers] here, so we’re closely knit and all know each other,” Kalā said . “We all see each other out in the water and make friends that way.”

The surfers already included in the community might be close, but they are often wary of newcomers trespassing on their turf.

“[Nowadays] it is just overcrowded,” Mavericks Big Wave Invitational founder Jeff Clark, 54, said.  “You’ll get a mix of these guys who maybe should not be out there with some of the top surfers. You are sitting out there long enough and everyone wants to catch a wave so guys start pushing themselves a little harder.”

With Nor Cal surf towns like Santa Cruz becoming increasingly popular destinations for tourists, locals protect their surf spots and are often frustrated by what they perceive as unmannerly intruders crowding their waves.  Although there is no win or lose in free-surfing, there is a limited supply of waves, creating competition and aggression.

In order to maintain harmony and safety in the water, there is an unwritten code of conduct passed down from generation to generation, dictating the behavior of surfers.

This set of unspoken rules unites independent surfers, creating intimate bonds between strangers through their common love and respect for the ocean and the sport.  There is a competitive yet peaceful flow: an ongoing consistency of behavior and actions amongst neighboring surfers, whether or not they choose to interact verbally.

When this flow is interrupted by naive newcomers, unaware of the policies of surfing, the reactions from local surfers can be intimidating.

While attempting to get a taste of the “epic” lifestyle, individuals from Palo Alto and other inland towns sometimes unknowingly fit the surfing reputation of “valley kids” by disrespecting surfing’s proper code of conduct and courtesy of the surfers around them.

Many surfers in Santa Cruz and other Nor Cal surf towns are protective of waves and spots in the lineup.  Kalā is one of them.

“We specifically don’t like people from Palo Alto because they come over here trying to surf our waves, making it more crowded and all that,” Kalā said.  “If you guys had something over there, that we didn’t,  like a super cool skate park, then all of us would drive over there and skate your skate park and get in your way.  You probably wouldn’t like us either.  So it’s the same thing over here.”

While Santa Cruz may be known for its protective surfing culture, other Northern California surf spots aren’t as competitive.  Half Moon Bay resident and long time surfer, Tim Heart appreciates the laid back surf mentality of his own community.

“In Santa Cruz, you can be [riding] the best waves on the coast but with the worst people,” Heart said.

However, Eric Page, 41, a Palo Alto surfer,  has been “keen on being respectful,” and therefore avoided potential incidents in the water.  He watched, listened, and learned from the locals and through his attitude and skill, has made a place for himself in the local surf community of Santa Cruz.  Although Page does not live by the ocean, he feels that locals respect how much he has improved and the love he has acquired for the sport.

“I feel 100% accepted [by the Santa Cruz locals],” Page said.  “But, I am one of the only non-locals to have this experience.  I see arguments [in the ocean] everyday and it’s usually local on non-local.  And almost always, the local is right.”

Surfers are naturally territorial.  But often, when outsiders sum up the “surfers’ lifestyle,” they include the false assumption that all surfers are “pot-heads” or “stoners.”

Surfing gives a natural high to many, satisfying their desires to feel elated.

“[Surfing] gives them that high, fun, and focus,” Gary’s wife, (Kalā’s mom) Robin said.  “It keeps them from wanting or trying to experiment [with drugs]…that are out there to make them feel happy or feel good.”

For devout surfers, the sport is almost like an addiction.  Lack of surfable waves creates a void of stimulation, often leading to drug use amongst pros and amateurs alike.

“The problem with surfing stars is that they get this euphoric high [while surfing],” retired professional surfer Lars Hansen, 55, said.  “And if there’s no surf they get real [anxious] and a lot of them turn to drugs.”

Mirroring their obsession for the waves, it is not uncommon for surfers to get wrapped up in this rock-star lifestyle.

Hansen knows many surfers “that became World Champions and had homes, had boats, money and it all went up in things such as drug use, methamphetamine, crack, cocaine, and drinking.”

Although Hansen has friends who have turned to a life of substance abuse, he himself has managed to stay clean while maintaining his love for surfing.

“I’ve made it out through the years without getting into narcotics or anything of that sort,” Hansen said. “But there have been problems with that.  I’ve got close friends that are World Champions and have lost it all. Some have come back, some have died.”

SC Board Shop employee Corey Ryan, who was introduced to surfing by his mom, the “biggest beach girl ever,” as he calls her, notices a lot of drug use among professional surfers in Santa Cruz specifically.

“One of the worst epidemics is the professional surfers in Santa Cruz’s use of methamphetamine and drugs like it,” Ryan said.  “Like heroine, prescription pills, methodone and oxy cotton and that kind of crap.”

Contrary to common stereotypes and generalizations, some surfers do not succumb to drugs.

“Definitely a lot of surfers do [smoke marijuana], especially in Santa Cruz, but that’s just the way Santa Cruz is,” Bolaños said.  “But there are people that just like to surf and do it [without weed]. That is the biggest [generalization about surfers that’s not true].”

Carpenter also rejects the stereotype that all surfers are “pot heads.”

“The people I know, and the guys I hang out with who are serious about the sport, like my brother and boyfriend, are the straight edge guys who go to bed at nine so they can be the first ones out [in the ocean] in the morning,” Carpenter said.

In organized sports, there is a code of conduct that comes with competing against other teams.  Sportsmanship and respect for other athletes is taught at a young age in sports like soccer, basketball and football; surfing is no different.  Although it’s not written in an official handbook or clearly stated, the surf culture is one with athletic and social norms.  Surfers aren’t always competing for points on a scoreboard or a win-loss record like many athletes are used to.  Instead, they embrace the sport for what it is: a way of life.