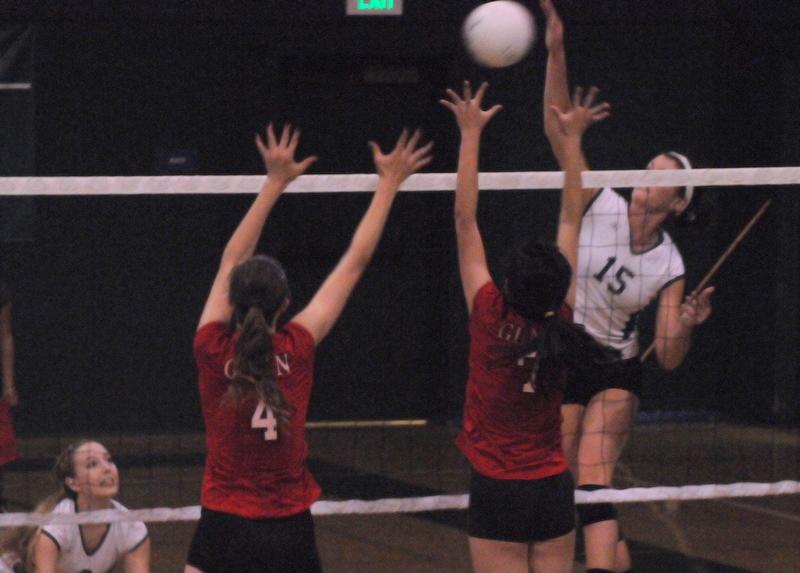 Coming off a 2-2 record this weekend at the Mitty Tournament, the Palo Alto High School girls’ varsity volleyball team (13-2, 1-0) bounced back to start its league play off with a 1-0 record after beating cross-town rival Gunn High School (10-6, 0-1) tonight at Paly in three games.

“I liked the fact that we got challenged this weekend, playing in a tournament with that much caliber,” Paly head coach Dave Winn said. “Coming in to today, we knew the competition might not be as strong. I knew Gunn had good players but we didn’t know what they were going to do.”

Paly took control early in the game after the Lady Titans performed four unforced errors in the first points of the game. The Lady Vikes went on a six point streak that was stopped by a kill from Gunn’s outside hitter that bounced of the Lady Vikes’ block.

At 6-1 Paly, the Lady Vikes got the side out off a left-handed kill in the center of the court by Paly setter Kimmy Whitson (‘12), and went on to use this momentum to take the lead 9-1.

The two teams rallied back-and-forth for several points, but Paly maintained a steady lead throughout the entire game. A powerful kill by Paly middle blocker Melanie Wade (‘12)  put the Lady Vikes at 22-8 set the tone for the rest of the game, as Paly would capture the win off another of Wade’s kills, ending the game at 25-9.

In the second game, the Lady Vikes played a slower game, but still executed their defensive skills.

“We pretty much refocused going into this week,” Paly middle blocker Jackie Koenig (’12) said. “Our main focus of the game was defense, which we struggled with in the tournament.”

After a solid 10-2 start by Paly, Gunn steadily caught up after several Paly errors. At 15-8 Paly, a kill by Paly outside hitter Maddie Kuppe (‘12) allowed Paly to regain control. The Lady Vikes were able to keep a distance throughout the match, however Gunn took charge at 20-11 Paly. The Lady Titans went on to steadily climb to 20-15 with several kills and Paly defensive errors. Although Paly struggled to keep its lead, the Lady Vikes cleanly finished the game with a kill by outside hitter Becca Raffel (‘14) to end the game 25-18.

Gunn shook up Paly’s offense with a 3-1 lead in the third game, but could not anticipate Wade’s tip placement on offense when she scored two points back-to-back for the Lady Vikes in the same spot. Compared to the first game, however, Gunn matched Paly’s intensity throughout the game and played level with the Lady Vikes’ offense.

After fighting point by point to be tied at 7-7, the Lady Vikes gained control and went on a five-point streak. The Lady Vikes continued to lead, gaining momentum when Paly performed a tricky offensive play that set up Kuppe for the kill to put the team at 18-10. Although Paly had some offensive unforced errors, the Lady Vikes maintained a steady lead, and back-to-back kills deep in the left corner by Kuppe allowed Paly to keep a solid 23-14 lead.

Gunn outside hitter Julia Maggioncalda (‘12) hit a ball in the deep left to put the Lady Titans at 23-15. Paly got the side out and Wade closed the game out with a kill to the middle to end the game at 25-16.

Going forward, the Lady Vikes will focus on one game at a time.

“We set our goals everyday,” libero Tiffany Tsung (’12) said. “It’s not about winning this year, it’s about improving.”

“As good as our team is, we have the potential to be even better,” Winn said. “I’m excited to watch us get a little bit better every match so that when we look back at the beginning we can say ‘Wow, that team wasn’t nearly as good as it is now.’”

The Lady Vikes’ next game is against Mountain View away on Thursday at 6:45 p.m. 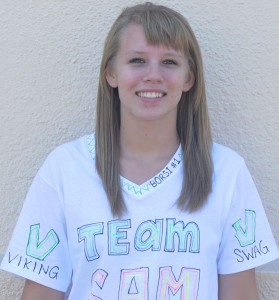 Sam is a senior at Paly and has done feature writing, news, photography, and design as a managing editor for The Viking. This is her second year on staff....