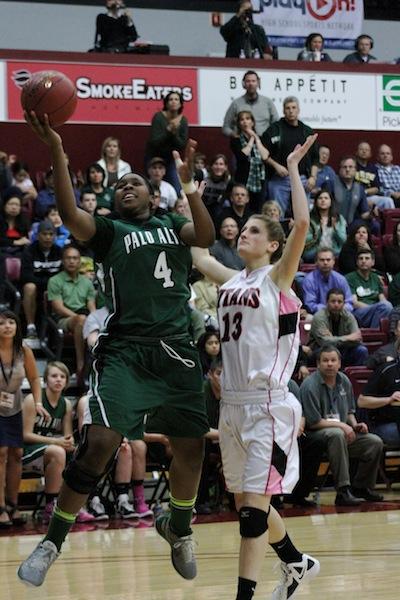 This was the first time the Lady Titans basketball program has captured a CCS title.

“You put out your best effort, you lose the game, you learn from the lesson and then move on,” Paly head coach Scott Peters said.

The game opened and the teams were neck to neck. Paly put the first points on the board but Gunn was quick to respond. Through the first quarter, scoring came at a premium and neither team was able to pull ahead. A couple buckets from Gunn gave Paly a small deficit but threes from Annie Susco (’13) and Lindsay Black (’12), closed the gap once again.

The first half ended with the Lady Vikes trailing by a significant seven points. However, Emilee Osagiede (’12) came out with a renewed energy. With a quick steal and pass to Susco who finished the play with a basket for the Lady Vikes.

Osagiede built on her momentum, stealing the ball once more and finding Black who sunk a three, closing the gap to 21-19.

Finally, Paly was able to tie up the game at 21-21 for the first time since the first quarter when Stephanie Allen (’13) was fouled and scored both of her free throw points.

The Titans were then able to come up with a response for the seven unanswered points, but Paly kept pace. Then, Osagiede came up with a clutch steal and a drive to the basket to give the team a long absent lead 25-23.

The rest of the quarter was the same, back and forth aggressive play from both sides. Julia Maggioncalda (’12) put out an impressive third quarter performance for the Titans, scoring two three pointers to end the period with a 30-29 lead in Gunn’s favor.

Fouling from both sides proved to be an important factor in scoring during the third quarter.

“This was a difficult game with Paly, it was important to know who the key scorers were,” Gunn’s Claire Klausner (’13) said. “If you’re getting fouls called on the other team you want to try to get them in foul trouble.”

The fourth quarter started with both teams being unable to score until Gunn’s  Meghan Mahoney (’14) was fouled and scored on both of her free throws making the score 32-39. Elmo narrowed the margin when she added two points for the Lady Vikes.  Gunn responded with two points of their own from Magincolda.

With five minutes remaining in the period, Abby strong hit a three pointer to tie the score 34-34.  The Titans regained their lead after Perez, Maggioncalda,  Klausner all made free throw shots. The Lady Vikes needed a three to tie up the game but the ball refused to go in the net.

“We had a lot of energy but we didn’t channel it to actually finishing and playing hard all the way through,” Black said.

Paly failed to close the gap as Allipate missed two scoring opportunities.  Perez made it to the free throw line again and sunk both of her shots brining the score to 41-36.  Osagiede sunk a three pointer at the buzzer to bring the final score to 41-39, but it proved to be too little too late.

The team will move on to the Nor-Cal tournament, games of which are to be determined.

“I would like for us to come out strong and win our next game,  and if we don’t win at least have enough energy to be able to say after the game that we played our hardest,” Black said. “That’s what I expect of my team and I can’t say that tonight.”