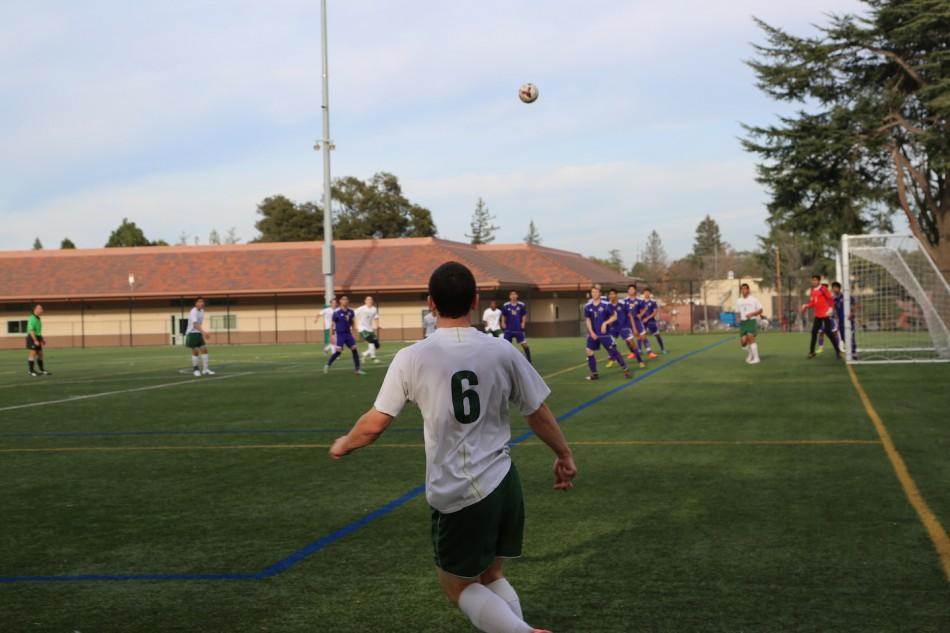 Captain Preston Kuppe ('15) looks on as his corner kick flies through the air. The Vikings went on to lose to Monta Vista 1-0.

The Vikings played host to Monta Vista on Tuesday afternoon and lost a nail-biter to the Matadors, 1-0.

Despite the home advantage, Palo Alto gave up the early goal in the second minute, giving the visiting Matadors the 1-0 lead. There were questions over if the play building up to the goal was offsides, but despite the protests of the Vikings, the goal stood. It was also Palo Alto’s first goal against them in league play. But despite the setback, the Vikings pushed on through the middle of the field.

Wesley Woo (’15) was at the heart of the action, neatly passing the ball back and forth between Edward Chen (’15) up front. This ultimately culminated in Dami Bolarwina (’16) hitting the crossbar from twenty-five yards out. Ten minutes in, Palo Alto started to feel the pressure that Monta Vista began to pile on. In one particular play, goalkeeper Eli Friedlander (’16) was only able to watch as the ball flew over his crossbar.

The physical nature of the game lead to many fouls being called, with center back Preston Kuppe (’15) appealing for the call after a coming-together with the opposition winger. A fast break led to Palo Alto’s next chance. Winger Cole Tierney (’16) broke down the left side of the field, cutting back to put the ball into the box. Michel Sabe (’17) flicked the ball into Xavier Sherer (’15), who was only able to direct the ball at the goalkeeper.

In the second half, the Vikings pushed on into the Matador’s half. After a corner, Sherer chested the ball and shot on the half-volley. The ball went just above the crossbar. Ariya Momeny (‘14) also had an golden opportunity to score after he was put through on goal by Woo but his shot was saved by the diving Monta Vista goalkeeper. In the end, the Vikings lost their first game of the season.

“It is a wake up call,” Kuppe said. “Hopefully we can get our momentum back.”