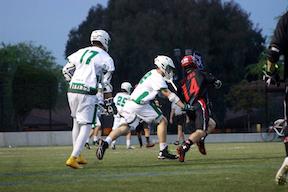 The Palo Alto High School Boys’ lacrosse team played host to their cross-town rivals, the Gunn Titans, Friday night. The Vikings’ came into the game on the back of a three-game losing streak with a 1-3 overall record, while the Titans have won their last two games on the way to a 3-2 record.

The Titans started off the better of the two teams, winning the faceoff and immediately scoring. Palo Alto responded through Matt Seligson (’16) who scored two quick goals to give the Vikings the 2-1 lead with 3 minutes gone in the 1st quarter. Bradley Brewster got into the action, slotting home in the left hand corner to increase Palo Alto’s lead to 3-1. The rest of the quarter was a back-and-forth between the two teams, with neither team able to score as the 1st quarter ended.

The beginning of the 2nd quarter started with Zach Levitan (’15) scoring, his first of the game. Quintin Valenti (’16) made a number of important saves to keep the Vikings in the game. Hayden Libbey (’17) scored to add to the Vikings’ increasing lead. Levitan hit the post, a sign of the Vikings’ dominance on the game. Owen Staiger (’15) scored, to give Palo Alto the 6-1 lead going into the halftime break.

Immediately after the break, the Vikings added to their lead. Seligson scored after Levitan ran around the goal and passed to him, who slotted home. It was his third goal of the game, and the Vikings’ 7th. Halfway through the 4th minute of the 3rd quarter, Gunn scored again to take the scoreline to 7-2. In the dying seconds of the 3rd, Levitan scored his second of the game to take the score to 8-2.

The start of the 4th was evenly matched between the two teams. Levitan scored his hattrick goal to give the Vikings’ the 9-2 lead. Gunn scores again halfway through the 4th quarter. Palo Alto responded through Seligson, who slotted home after a snaking run through the middle of the field. It was Seligson fourth of the game and the Vikings’ 10th. Owen Dulik (’17) got in on the action, scoring his first of the game to give Palo Alto the 11-3 lead.

After the game, Coach DJ Shelton said that he thinks that this win for Palo Alto had significance beyond the field.

“It being the opening league game, there was a lot riding on this,” Coach Shelton said. “The list is endless: it’s our crosstown rivals, first league game of the season, we’ve dropped three games straight…I think it’s really important that the kids came out here and played hard.

“[The win] means a lot,” Seligson said. “We didn’t play Gunn last year, so it was a big deal for us and them. In terms of the season, we have a long season ahead of us. It was our first league game, so yeah, it feels good to get a win at the beginning but we have a lot to accomplish.”

The Vikings’ next game is against Saratoga at home on Wednesday, March 18th.