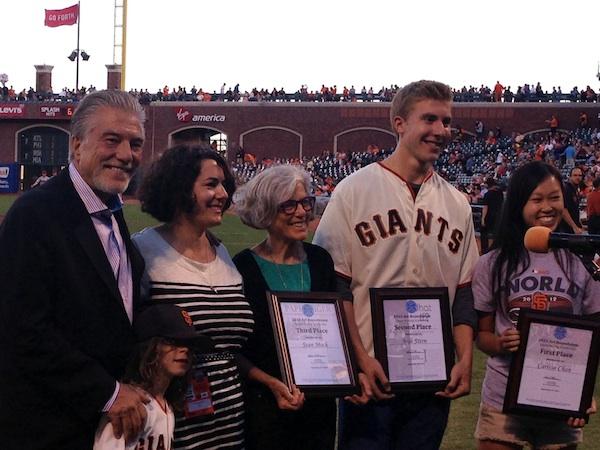 Named after Art Rosenbaum, a San Francisco Chronicle editor and writer for 60 years, the award is given annually to three high school journalists from around the Bay Area. Concerned that many schools in Northern California were having their publications eliminated due to economic problems, Rosenbaum created a fund for high school journalists; his proceeds of $44,000, going into the scholarship fund. Each year, the winners of the award are invited to AT&T Park to accept their scholarships.

“We were walked onto the field behind home plate and I was with the two other finalists,” Stern said. “One finalist wasn’t there so his parents accepted on his behalf. They had the Giants announcer announce the award and gave a little description of what the award was and they presented the awards to each of us.”

Of the three Scholarship awards given, Stern won second place for his sports feature “What if?” in The Viking’s fifth issue, published last April. Granddaughters of the longtime San Francisco Chronicle editor, Cindy and Jenn Viola Rosenbaum presented Stern with a check of $1,500 in scholarship money.

“I was glad [when I heard I had won the award] because writing the story was a lot of work,” Stern said. “I felt like all my hard work had paid off.”

Stern competed with Bay Area juniors and seniors who have all written sports related articles for their high school. These articles were then judged by a panel of veteran sports writers.