Column: Keep On Fighting (But Watch Out For Sharks!) – The Viking Magazine

Column: Keep On Fighting (But Watch Out For Sharks!) 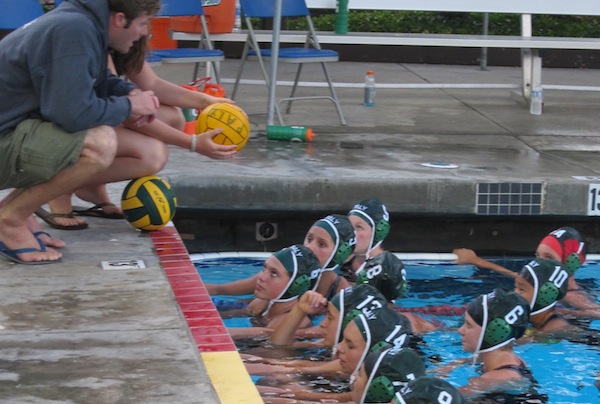 Week five of column writing and I’m still going strong. Some non-believers thought I’d never make it this far. Sometimes I thought that myself. But hey, here we are! And I’m glad. My columns keep me sane between the stress of college essays, my Shanmom-ness and wild family escapades. And if you guys get a laugh out of it, I would say it’s good for everyone, yes?

Alrighty, let’s cut to the chase. So this was a pretty dynamic weekend for the Paly Girls’ Varsity Water Polo team that I play on. Every year, one of our mid-season flings comes in the form of the Amanda MacDonald Invitational tournament, a competition hosted by Menlo School that invites the best in the bay to the Menlo pool for a 48-hour water smack down. So of COURSE, Paly Polo rolls up, as the best looking team in the 6-5-0 with our sassy bro tanks. Our team’s opening game? Saint Francis.

Not gonna lie to you all – I was nervous for that game. Playing Saint Francis is always a daunting task because of all of their CCS winnings and private school sports prestige. However, my co-captain Skylar Dorosin (’12) and I took it upon ourselves not to lead a frightened and skittish squad into the pool. We have encountered tough pressure defenses like the Lancers before and figured we would jump in there and give it our best shot.

The first quarter went well. Both of teams played a physical game, as expected, and by the end of the first seven minutes of play the Lancers were ahead 1-0. But by the second quarter, the energy shifted. It’s safe to say sharks entered the water. (Metaphorically, of course – for all of you folks afraid of open water, just remember that sharks DO NOT live in pools. And if you have a pool and a shark lives in it…well then you have a problem on your hands.) By the end of half, it was 8-0.

WHAT JUST HAPPENED? I was speechless. I was in pain. We kept fighting, all the way to the end, but there was no coming back from our second quarter defecit. The final score smacked me in the face almost as hard as Tom Brady would for my love of Peyton.  13-2.

After our game it donned on Skylar and I that there was a larger reason for the Paly squad’s epic choke that eventually spiraled to our downfall. Our team played scared. No one player was to blame – each person had their doubts. And frankly, it showed. It was tough to get up after that loss. When you play scared, you feel it in your whole body. You are mentally tired from freaking out for 28 minutes nonstop. And I could tell our team was feeling these side effects.  As much as we all wanted to go back and undo the damage that was done, it was simply not possible.

Obviously, entering a tournament on such a sour note is the polar opposite of ideal. But as they say, life goes on. Before our matchup against Menlo, the team burnt off a little steam by jumping around on the grass and watching our goalie Eve Higgins (’12) scare off Menlo College students with her army rolls around the campus. Going into our last game of the night, the Saint Francis game was the furthest from our minds. We went in and demolished Menlo, 12-2.

Now I know that sounds like a Cinderella story, typical sports redemption. But this wasn’t like one you see in movies. We had two more games the next day of the tournament, and we finished 2-2 overall. But the truly remarkable part of this experience was that even after being so scared, so downtrodden from our first game, Palo Alto came back fighting. We may not have always won, but we didn’t stop. This weekend, I reflected on why this was the case: what caused our team to transform our mentality from flight to fight?

Friday night after our games, we had a rambunctious team dinner in my basement. It was, simply stated, off da chain. I was busting out the awkward dance, Skylar and Tara Lawrence (’14) tried on every item in my family’s dress up closet, and we all ended up laughing so hard that we fell in a giant pile on my living room floor. So it dawned on me: after a rough day or a bad game, take some time to blow off steam. Laugh a little. Get the team out of the serious setting and into the fun zone. Remember, we play sports to win, but the relationships that we build as a result of playing are far more valuable than the numbers on a scoreboard.

When you fall, you get back up. Or if you’re like me, you trip a few times out of klutziness before standing tall. The point is, you stand proud. So I guess you can call me a philosopher for that little piece of insight. I mean, I did take humanities!

You know the drill, Paly. Until next time…Scheel is out.

Column: Keep On Fighting (But Watch Out For Sharks!)