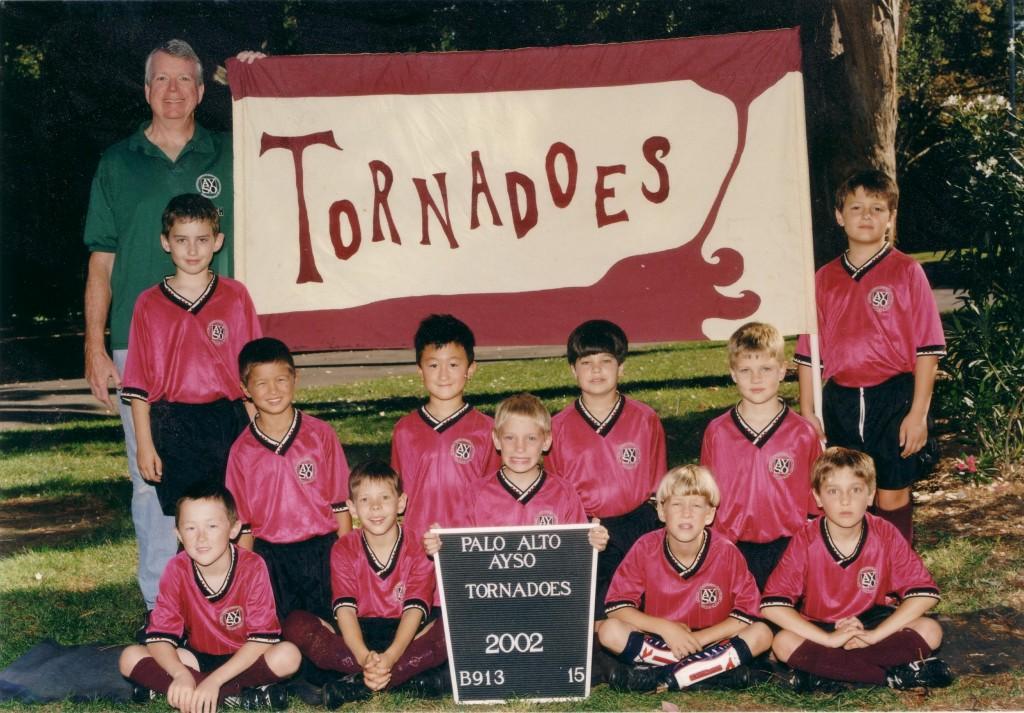 Look at this stellar team! The writer is cheesin' it in the bottom left corner.

As I write this column, the Philadelphia Eagles (aka the NFL’s new “Dream Team”) are losing to the Seattle Seahawks 7-14.

Somehow I don’t think this is how the Eagles’ ownership envisioned this post-lockout season turning out. 4-7? Michael Vick injured? Yeah…probably not.

And like everyhing else I see sports-related that turns into a column, this got me thinking. How do people expect Dream Teams to work out anyhow?

With so many huge egos, its any wonder how the teams are even able to figure out the same playbook. Mike Vick + Vince Young = explosion.

There is only one team ever to do something so bold. The only stacked team to ever really do major work was the 2009-2010 Paly Boys’ JV basketball team. That stellar team went 24-0, “sinched” the playoffs, and beat Los Gatos 38-9. That score in and of itself is great right? Well, what do you think about it when I tell you that Los Gatos never scored a field goal? Yep, they never made one hoop from the field. All free throws. Now that may be a testament to our simply fantastic defense (yeah, right) or them just being terrible (the latter being the correct answer).

But back to the point at hand. The Heat were supposed to be “Finals or Bust” after their preseason party in South Beach. I guess they busted then, because the talents LeBron took to South Beach obviously weren’t enough to overtake all 175 pounds of J.J. Barea and the Mavericks.

Kobe and Shaq could only deal with three seasons of each other before they started taking verbal blows at each other. Granted, they did have three straight championships, so as a Laker fan, I’m hardly complaining. Actually, this isn’t a great example. I just brought this up to brag about the Lakers and their fabulous play.

No, there are only a few teams that can really say they were both stacked and did well. And there are pretty much three categories of these types of teams: the Olympic teams, the Yankees or some European soccer team.

The Olympic teams are only included because they inherently have the whole “lets represent our country and kick major butt in international competition to show how sick America is” idea behind them. The Yankees have the boatloads of bank to finance such an operation, but it hasn’t done them very well as of late, as we’ve seen the lowly Rangers and their boring uniforms take two straight AL pennants.

Now to the soccer story. Now usually, I’m not one to advocate soccer. I really have never understood the sport at all, except in AYSO. I was so good, I would whiff on the first shot attempt, make the goalie lunge, and then net it the second time. I can’t remember whether that was on purpose or not, all I know is that it really paved the road to the championships for the Maroon Tornadoes. (Whether or not AYSO even has a postseason for second graders is a completely different story.)

But European teams have boatloads of bank like the Yankees and have that whole pride deal. So its the best of both worlds in some ways. Like take the feud between Andre Gouyet (‘12) and Andreas Winsberg (‘12). One likes Real Madrid, the other Barcelona. And the two can be always be seen taking potshots and the opposing teams’ players. Nothing like a bit of friendly rivalry.

From what I gather via that one fantastically universal, perfectly academically acceptable online encyclopedia, it’s completely commonplace for a soccer team to simply pay another team for another player. But unlike in American sports, that’s just to take him away from his team; he then has to negotiate a contract with the new team. So, for example, Madrid payed Manchester United ￡80 million, or €94 million. (But unless the current economic outlook in the Eurozone plays out differently, that might change and you might need to start speaking in terms of lira, pesetas and francs.) So, after being adjusted for inflation….(Ms. Whitson, you would be so proud!) that equates to around ￡81 million according to the fabulous Wikipedia. This all for Cristiano Ronaldo. One guy!

Unfortunately, that kinda shenanigans won’t happen here in the States though, not after the lockouts. But how sick would that be? It would literally be a bidding war, a la eBay. Who knows, if things had turned out differently, Meg Whitman might have become the next NFL commissioner.