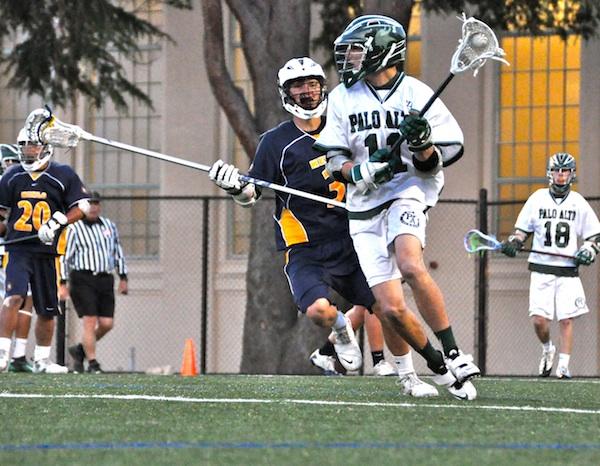 Jordan Gans (’14) looks to make a pass on offense. Gans had two goals on the night for the Vikings.

The Palo Alto High School boys’ varsity lacrosse team was not able to defeat Menlo for a second time this season, falling 11-7 to the Knights. Both teams stayed neck to neck throughout the match until Menlo was able to pull away in the fourth quarter.

“I dont like to say a good loss, but we played hard,” captain and defensman Gabe Landa (’12) said.

Kris Hoglund (’12) ripped open the game 40 seconds in, firing the ball past the Menlo goalie and into the net. Just 20 seconds later, Jonny Glazier (’13) followed with a goal of his own, grabbing an early two-goal lead for Paly.

The Vikings continued to dominate offensively, limiting the Knights attempts at goal, until with about six minutes remaining in the quarter Menlo snuck the ball past Andrew Kouchekey (’14) to get on the scoreboard. Paly was able to hold on to a one goal lead almost through the period, but with 17 seconds remaining, Kouchekey was checked as he came out for a ground ball and the Knights took advantage of an empty Viking cage, tying the game up 2-2.

The Knights carried their two goal momentum with them into the second quarter. Menlo was led offensively by Wiley Osborne (’13) who will be playing lacrosse at Dartmouth University next year. Osborne scored four minutes into the second quarter, securing a lead for the Knights for the first time on the night. Osborne quickly followed up with another goal, capitalizing off of a one vs. one situation against goalie Kouchekey increasing the gap to two, 4-2, Knights.

However, strong play from Paly underclassmen made it possible for the Vikings to tie up the game once more before the quarter ended. Jordan Gans (’14) and William Hare (’14) each scored respectively before time ran out for the Vikings, ending the half 4-4.

The third quarter was a struggle between the two sides in which the Knights outscored the Vikings 4-2. Gans had his second goal on the night just four minutes into the half, but Menlo quickly came up with two goals of their own to respond to Paly’s three goal streak, squeaking ahead by one, 6-5.

Paly’s Zach Levitan (’15) was quick to tie up the game once more before Menlo’s Osborne took matters into his own hands scoring two back to back goals within 30 seconds of one another. At the end of the third period, the Knights held a two goal lead, and massive momentum going into the final quarter.

“Menlo did a good job of taking the wind out of the ball. Controlling it, getting goals out of their possession and its just hard to come back from that,” Hoglund said.

Menlo’s success in the third quarter was in part due to the numerous penalties Paly had during the twelve minutes.

“It changed in the third quarter when we started giving penalties,” head coach Craig Conover said. “It was pretty close until then, but they really took advantage of it.”

Hogulnd had the final Paly goal on the night less than two minutes into the final period. While the Vikings had some offensive chances, the Knights pulled away as Osborne and two others each had one more goal on the night, making the final score 11-7, Menlo.

Paly defeated Menlo earlier on in the season, and Conover reflected on this game as compared with a few weeks prior.

“I really don’t know [what was different this time], I need to watch the game film to figure that out,” Conover said. “They played a better game this time. They have just gotten better. We played a great game, but the penalties killed us.”

The Vikings play a non-leaguge game tomorrow vs. University and have three league games next week to close out the season.

“We can’t lose again,” Landa said. “If we want our seed in the playoffs, we cannot lose again. The same intensity we brought today, we have got to bring it to the rest of our games.”