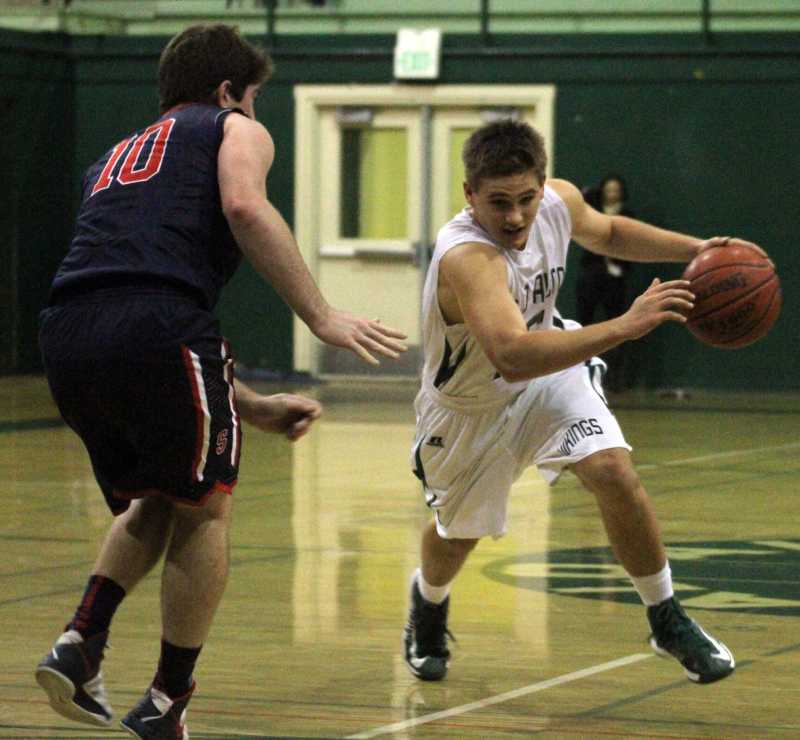 The Paly boys’ basketball team got the best of the Saratoga High School Falcons 57-47 Tuesday at home.

Despite low attendance, the Vikings were able to maintain intensity and lead the Falcons throughout the game. Paly’s Aubrey Dawkins (‘13) led all scorers with 27 points.

Paly head coach Adam Sax was happy with the win, citing his team’s defense as the primary reason for the victory.

“We didn’t shoot the ball very well, but we played defense,” Sax said. “For the most part our defense was pretty good.”

First quarter play opened with back-and-forth scoring between Paly and Saratoga. The score was tied at 4-4 when Aldis Petriceks (‘13) drove to the net and put Paly up 6-4. The Vikings never relinquished their lead. A steal and breakaway from Dawkins increased the Paly lead to four points.

Back-and-forth scoring continued, putting the score at 10-8 when Dawkins was fouled and hit both free throws in the closing minutes of the quarter. The Vikings added two more points to give themselves a 14-8 lead as the first quarter expired. However, several missed three-pointers by the Vikings punctuated the quarter and kept the score close.

In the second quarter, Paly began to pull away from the Falcons. The Vikings hit their first three-pointer to put the score at 17-8. Consecutive fouls by Saratoga on Dawkins and Keller Chryst (‘14) added three points to Paly’s score. Following fouls on both teams, the score was at 22-10.

Saratoga added five unanswered points to their total, cutting Paly’s lead to 22-15. However, Paly added two points, and with 2:16 left in the half, Dawkins electrified the stands with the first dunk of the game. Saratoga quickly responded with a 3-pointer to put the score at 28-18, but the Falcons failed to score in the rest of the half.

Two free throws and another dunk from Dawkins put Paly’s halftime lead at 32-18. The half closed hectically as Saratoga attempted to gain some momentum, but were unable to put points on the board. Dawkins ended the half as the top scorer with 14 points.

The Vikings struck first in the second half as a Chryst rebound was converted into a 2-point field goal by Mathias Schmutz (’13). Saratoga hit another three-pointer, but an alley oop from Schmutz to Chryst at 5:40 kept the Viking lead comfortable at 36-21.

The Falcons then responded with five points, causing Paly coach Adam Sax to call a timeout at 3:53. Twenty seconds later, Paly added two points, but the Falcons quickly made up for it with a three-pointer. Scotty Peery (‘13) then hit the Vikings’ first three-pointer of the game to put the score at 41-29 with three minutes left in the quarter.

Saratoga was only able to cut Paly’s lead to 10 when the third quarter ended, the score 45-35.

The Falcons drew a foul on their second drive of the fourth quarter, adding two points, but Dawkins responded with a two point layup to maintain Paly’s 10-point margin over Saratoga.

After cross-court ball bobbling from both teams, Petriceks recovered a rebound and on the ensuing drive Dawkins hit a three to put Paly up 50-37.

Both teams drew fouls in the fourth minute of the fourth quarter, but Paly remained in the lead with the score at 51-39.

A three-pointer from Saratoga was answered by two dunks by Dawkins, at 1:20 and 0:50, which excited fans in the closing minutes of the game and gave the Vikings a 55-45 lead. Two more scores by Paly and Saratoga, respectively, ended the game at 57-47, a Viking victory.

Sax looks to continue the team’s success as the season goes on and league play heats up.

The Vikings next hit the court Friday, Jan. 11 at Homestead High School in Cupertino.