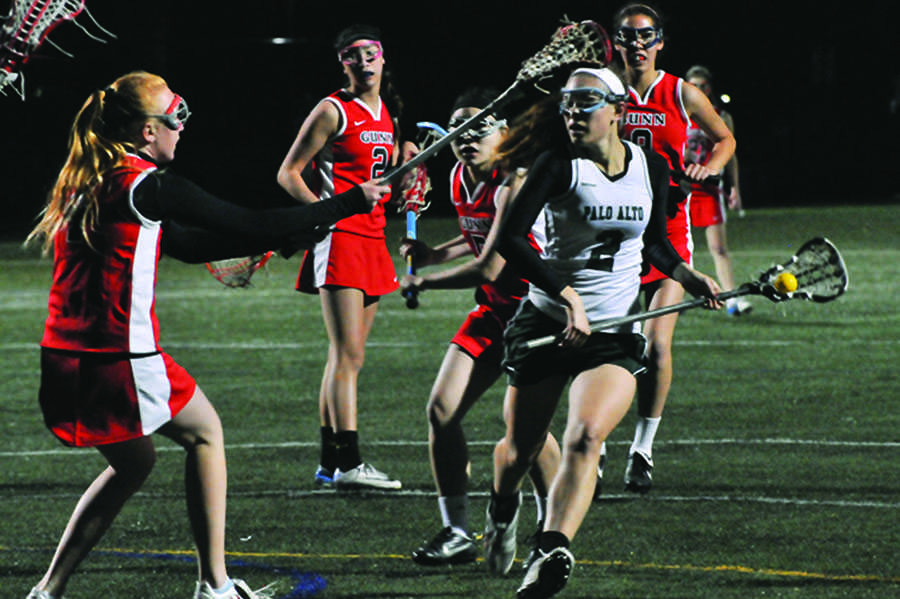 Ami Drez (’14) drives towards the net through Gunn defenders. The Vikings went on to win the game 15-8.

In their seventh straight win, the Paly girls’ lacrosse team trounced the Gunn High School Titans 15-8 at home on a rainy Tuesday night. The team is now 7-0 overall (5-0 in league).

Though the Vikings pulled out a convincing victory against their crosstown rival to remain undefeated on the season, coach Jamie Nesbitt was on the whole displeased with the team’s play.

“It was a messy game,” Nesbitt said. “We couldn’t catch and throw as well as we usually do and we weren’t really playing smart. I think we got off to a good start and then we kind of relaxed and let up and I think we really let the emotion of the game get to us.”

The game remained close through the first 10 minutes of play. Gunn got on the board first at 24:05, but Paly quickly responded with a goal from Nina Kelty (‘13) 20 seconds later to keep the match tied at 1-1.

Paly and Gunn netted two goals each to put the score at 3-3. The Vikings then went on to tally six unanswered goals, a streak which carried into the second half, putting the score at 9-3 with 23:31 remaining in the game.

The Titans were unable to overcome the six-goal deficit in the remainder of the half, and time expired with the scoreboard reading, 15-8.

The Vikings look to carry on their winning streak when they face the St. Francis Lancers at 7 p.m. Thursday at St. Francis.