Vikings get blown out by Archbishop Mitty – The Viking Magazine

Vikings get blown out by Archbishop Mitty 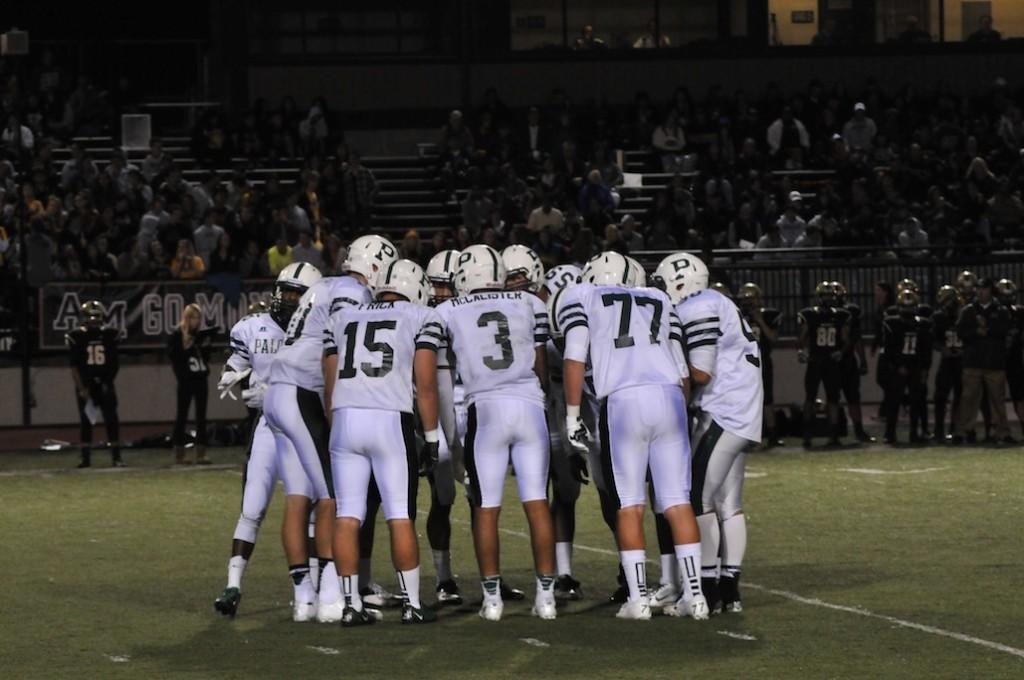 Unlike the rain that subsided midway through Saturday afternoon, the Archbishop Mitty Monarchs did not let up, blowing out the Vikings 34-14 Saturday night at Foothill College.

Compiling an 80-yard drive that culminated in a 21-yard Keesean Johnson (’14) touchdown to open the game, Paly’s quick start was cut short as the Monarchs responded with a two play and 20 seconds drive; Monarch quarterback Brett Foley (’14) ran 60 yards for a touchdown, evening the score at 7-7.

From that point forward Paly never regained the lead. After some effective defense on both sides and a punt by each team, Archbishop Mitty’s Kyle Evans (’14) returned a punt 77 yards for a touchdown, breaking numerous tackles along the way.

Evans scored again to start the second quarter, this time on a 65-yard run, putting the Monarchs ahead 21-7. This time, however, the Vikings had an answer. Following a 39-yard kickoff return by Johnson, quarterback Keller Chryst (’14) found Marcus Brown (’14) for 17 yards, and then Malcom Davis (’14) for a 43-yard touchdown, closing the deficit to seven.

After the Monarchs missed a field goal with around six minutes to go in the half, Paly had an opportunity to tie the score. Following a pass interference penalty against the Monarchs, Chryst connected with Andrew Frick (’14) for 61 yards that brought the Viking offense to Archbishop Mitty four yard line.

But two straight Paly penalties brought the ball back ten yards, and two incompletions and a three yard run set up a fourth down and goal from the 11 yard line. Instead of kicking a field goal, the Vikings opted to try for the touchdown, but Chryst threw incomplete to Johnson and the Monarchs got the ball.

After running the clock down to 12 seconds, the Monarchs attempted another field goal, this time successfully, making the score 24-14. On the ensuing kick-off, the Vikings could not field the ball cleanly and Mitty recovered it at the Paly 25 yard line. A 42-yard field goal gave the Monarchs another three points, and effectively ended the half.

Starting off the second half, the Monarch’s Dakari Monroe returned the kickoff for a touchdown, only to have the play nullified because of a holding penalty. Despite this break, the Vikings could not capitalize. After a punt by each team, the Monarchs scored again on a four yard run by Foley.

On the kickoff, Paly once again failed to hold on to the ball, and Archbishop Mitty recovered it. The Viking defense proceeded to stop the Monarch offense, but the game became a stalemate from their on out.

Palo Alto’s last chance was snubbed in the fourth quarter when Chryst was sacked twice in a row, both times by the Monarch’s Chandler Ramirez.

“Overall, [we didn’t play] so great,” Davis said. “I like that we didn’t quit, be we definitely have to get better next week.”

The Vikings play to practice hard next week in preparation for Friday’s match up against powerhouse Palma High School.

“We’ll go to practice, no joking around,” Johnson said. “We’ll go out there with a straight face and get better.”

Vikings get blown out by Archbishop Mitty