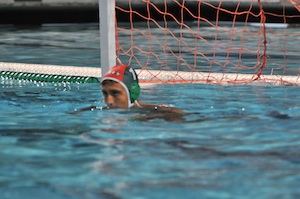 Paly (2-1) edge Mountain View (2-0) in a thrilling overtime victory. It was a close game that was dominated by physical play, but coach Brandon Johnson said afterwards that his players were not affected.

“We tried to make [Mountain View] play to our game,” Johnson said. “We don’t try to change and play like them.”

Paly got out to an early 3-1 lead through goals from Winston Rosati (‘16) and Lucas Novak (‘15) in the first fifteen minute quarter. Mountain View responded in the second quarter, scoring three goals before the end of the half. But, the Vikings scored two more of their own to take the lead going into the second half, 5-4.

Paly was on the attack right from the start of the second half, but could only take advantage of their well earned pressure once, after a well worked and patient play led to Rosati scoring again. But, Mountain View fought back, scoring another goal to cut the lead to only one going into the final quarter, 6-5.

Rosati was a force in the paint in the on the defensive half of the pool, making two key blocks and breaking down Mountain View’s play all throughout the night. But the man of the match was goaltender Jake Weinstein (‘14), who made constant saves and kept the Vikings’ noses in front.

Going into the fourth quarter, Paly looked like the more dominant side. Rosati smacked a shot off the post and Novak scored again to make the score, 7-5. But a quick break away by Mountain View led to another goal against the Vikings, and with thirteen seconds left on the clock, the Spartans capitalized on an opportunity to take the game into overtime, and tied the score at 7-7.

Heading into overtime, Weinstein thought that the biggest change for the Viking’s was not on the field, but the mentality of the team.

“Mentally, you gotta be prepared,” Weinstein said. “You don’t want anything going, it’s 0-0 at that point.”

Team captain Sam Kelley also thought it helped that it was not a sudden death scenario.

“We knew it wasn’t sudden death so that kept the pressure off,” Kelley said. “We knew that we wouldn’t have to do anything tricky or special, we just need to play our game, play solid defence, push the counterattack the other way, and eventually we would get enough goals.”

Goals from Novak and JJ Kadifa (‘14) gave the Viking’s a boosted 9-7 lead over Mountain View. But, it was nervy finish for Paly, as the Spartans scored a goal with forty-eight seconds. There was also controversy over the last final seconds of the game, with the Mountain View coach believing that the game clock was three seconds faster than the shot clock, and that the Spartans deserved three seconds more. It would not matter though, as the Viking’s recorded their third league win of the season.

Coach Johnson thought the biggest boost from the game was the team’s mentality.

The Viking’s will play next in the NCS/CCS tournament this upcoming weekend.