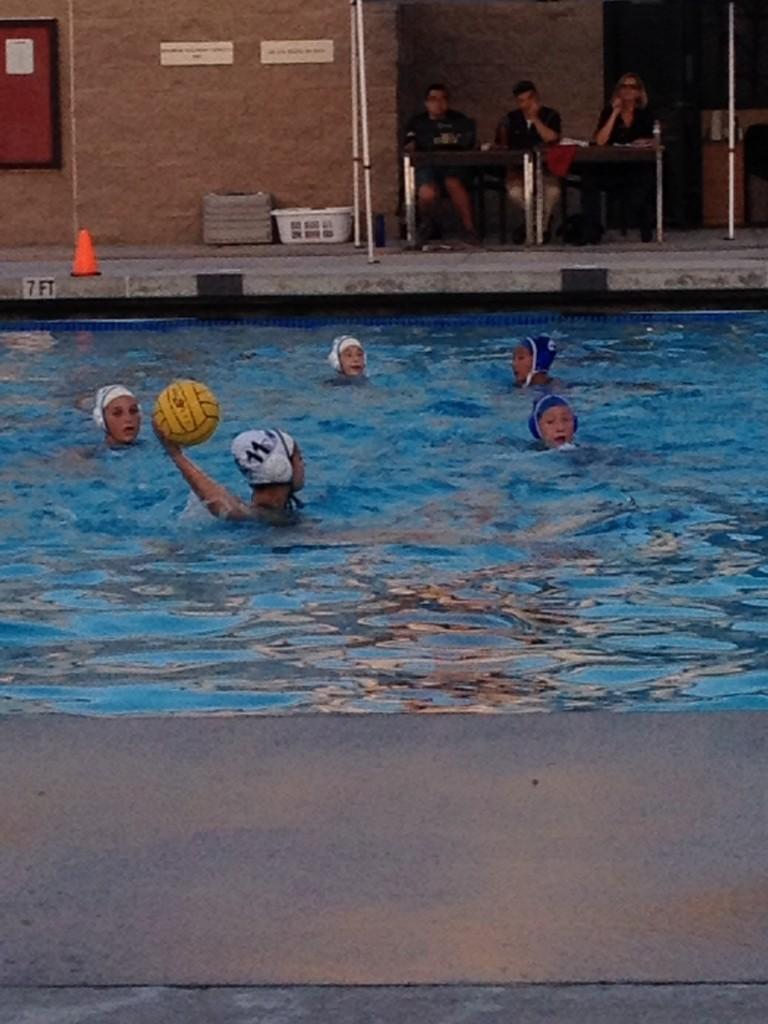 Emma Wolfe ('14) looks to shoot against Los Altos. The Vikings fell 8-4 Thursday night in the first round of the SCVAL tournament.

The Paly girls’ water polo team fell 8-4 to the Los Altos Eagles in the first round of the SCVAL tournament at Gunn High School Thursday night.

The game looked eerily similar statistics wise to the previous meeting of the two teams almost exactly a month earlier. Both games resulted in an 8-4 Los Altos win after the Eagles pulled away from a 6-4 lead early in the fourth quarter. Despite the similarities, however, senior captain Emma Wolfe thought the games were distinctly different.

“I think we played better than last time we played Los Altos but we really need to work on our passes and our communication,” Wolfe said.

The Vikings got off to a slow start as the Eagles scored the first three goals in the game before Tess van Hulsen (’15) netted one with nine seconds left in the first quarter. Wolfe scored midway through the second quarter to narrow the Eagles’ lead to one, but the Vikings never got any closer.

Los Altos scored once again before halftime, and then twice in the third quarter and twice in the fourth. Wolfe scored twice more during the second half including a penalty shot, but the effort was not enough. Despite the loss, head coach Aileen Delaney remained optimistic about the game.

“I thought we did great,” Delaney said. “We faced some adversity but totally fought the whole time as a team together”.

According to Delaney, the team has grown closer over the course of the season, and has made her proud.

“They have a don’t give up attitude,” Delaney said. “The want to keep improving and work hard all the way to the end.”

With the seasons end two games away, the lady vikes will look to bounce back tomorrow evening when they take on an undetermined opponent in another tournament showdown.

Katie Francis (‘15) seems to have a plan down for winning in the future.

“[We need to] make sure that we take smart shots and focus on our defense,” Francis said. “That’s our number one priority.”