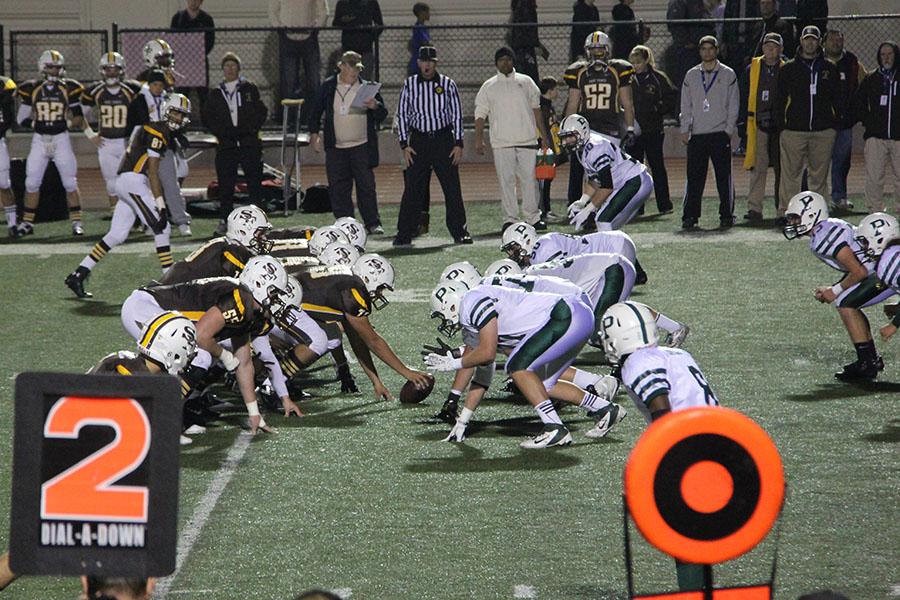 In the 2013 fall season, the Vikings fell to the Saint Francis Lancers 45-21 to end the season 6-6. The Vikings graduated 16 seniors and are looking to a young team to fill the graduated gaps.

Despite a strong effort, the Vikings lost 45-21 to the Saint Francis Lancers Friday night.

In a true tale of two halves, the Vikings kept the game close in the first and second quarters, but could not hold on for the rest of the ride. A few bright spots included Keller Chryst (’14) and Eli Givens (’16) connecting for two touchdowns, as well as a kickoff return touchdown by Malcolm Davis (’14). Head coach Earl Hansen had positive words to say about the team’s performance.

“We didn’t play quite well enough but we had a really good first half and battled and battled,” Hansen said.

The game started off poorly with a Paly fumble and a quick Saint Francis score. The ensuing drive resulted in a punt, but the Vikings then recovered a fumble three plays later. Chryst and Givens connected on a 71-yard touchdown to even the score at seven, but earlier in the drive Andrew Frick (’14) was injured on a run and carted off the field. Frick later returned to the sideline with a cast but did not play.

Two Saint Francis scores put the Lancers up by 14 midway through the second quarter. A quick interception had the Lancers poised to score again, but the Vikings forced their second fumble of the night and drove down the field. Chryst was intercepted again, but a third Paly fumble recovery gave the Vikings back the ball. Givens then caught his second touchdown to put the team within seven. The Lancers quickly responded with a 68-yard touchdown pass, one of their only pass plays of the day, putting them back up by 14. However, Paly got the last blow of the half as Davis returned the ensuing kickoff from within his own five-yard line for a touchdown.

After hanging on for one half, the Vikings could not manage it for a second. The Lancers ran the ball every single play and slowly drained the clock as well as punching in two more touchdowns and a field goal. The Paly offense was shut down and kept off the scoreboard as well as being forced to turn the ball over on downs numerous times. With only a couple minutes remaining, Chryst threw an incomplete pass deep to Keesean Johnson (’14) on a fourth and four, the last offensive play of the season. The Lancers ran out the clock and secured their 45-21 win. Despite the season-ending loss, Paly players were positive afterwards.

Chryst echoed the praise, calling attention to the team effort.

“It was a good strong effort from everyone out there, we just worked with what we [had],” Chryst said. “It wasn’t what we wanted in the end but we fought hard throughout.”

With the loss, the team finished the season with an even six wins and six losses. Coach Hansen had a few final words to wrap up the year.

“Overall, we grew up a lot,” Hansen said.