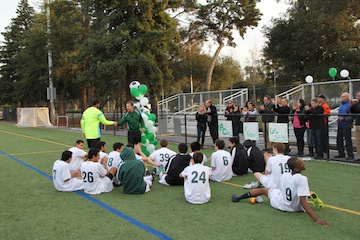 Goalkeeper Tony Maharaj ('14) shakes hands with Coach Don Briggs as Viking players and fans applaud. The Viking's would go on to win the game, 4-3.

The Palo Alto High School boys’ soccer team won an important game against Fremont High School, 4-3. Not only were the Vikings celebrating their three senior players: Cina Vazir (‘14), Neal Biswas (‘14) and Tony Maharaj (‘14); but the game also helped to decide if the Vikings would be relegated from the De Anza division of the Santa Clara Valley Athletic League to the El Camino League.

“We needed that win tonight to stay up,” Maharaj said.

With those things in mind, it was important that Palo Alto start on the front foot against Fremont. And five minutes in, that is what exactly happened. Captain Wesley Woo’s (‘15) inswinging free kick bobbled around the box before left midfielder Reuben Kramer (‘16) finished the play.

It was a deserved lead for the Vikings, who had been piling the pressure on the Firebirds through forwards Dami Bolarinwa (‘16) and Fernando Rodriguez (‘15). But before the Vikings could start to enjoy their lead, the Firebirds equalized through a goal of their own in the 19th minute. The early goals for both teams amplified the energy in the already fast-paced game, leading to a number of fouls in the first half and end-to-end action.

Paly’s second goal came on the break as forward Jack Stoksik (‘17) slid Kramer onto goal and the midfielder finished into the bottom corner. Before Fremont could respond, Paly scored again. Vazir slalomed through the Fremont defence and scored with practically the last kick of the half to increase the lead for the Vikings to 3-1.

The second half started the same as the first with an early goal coming from the Vikings. A corner kick from Woo was flicked by Kramer into the path of right back Steven Blatman, who smacked the ball into the net to take the lead up to 4-1.

But before the Vikings could start celebrating their victory, a penalty was given to the visitors and was converted to cut Paly’s lead to 4-2. Fremont soon after added to their score and made it 4-3, leading to a nervy finish. But the Viking’s were able to hold on to win on Senior night and to keep them up in the De Anza division.

“It was really important [to win on senior night],” assistant coach Amir Malekpour said. “Especially for the seniors and it’ll boost the morale for the rest of the team.”

Vazir believed that the win was the most important thing overall.

“I was really more focused on the game than Senior night,” Vazir said. “It’s a pretty big game, we didn’t want to get relegated so we came out and focused more on the performance than anything.”

The Viking’s next game is this Friday at Los Gatos at 3:30.