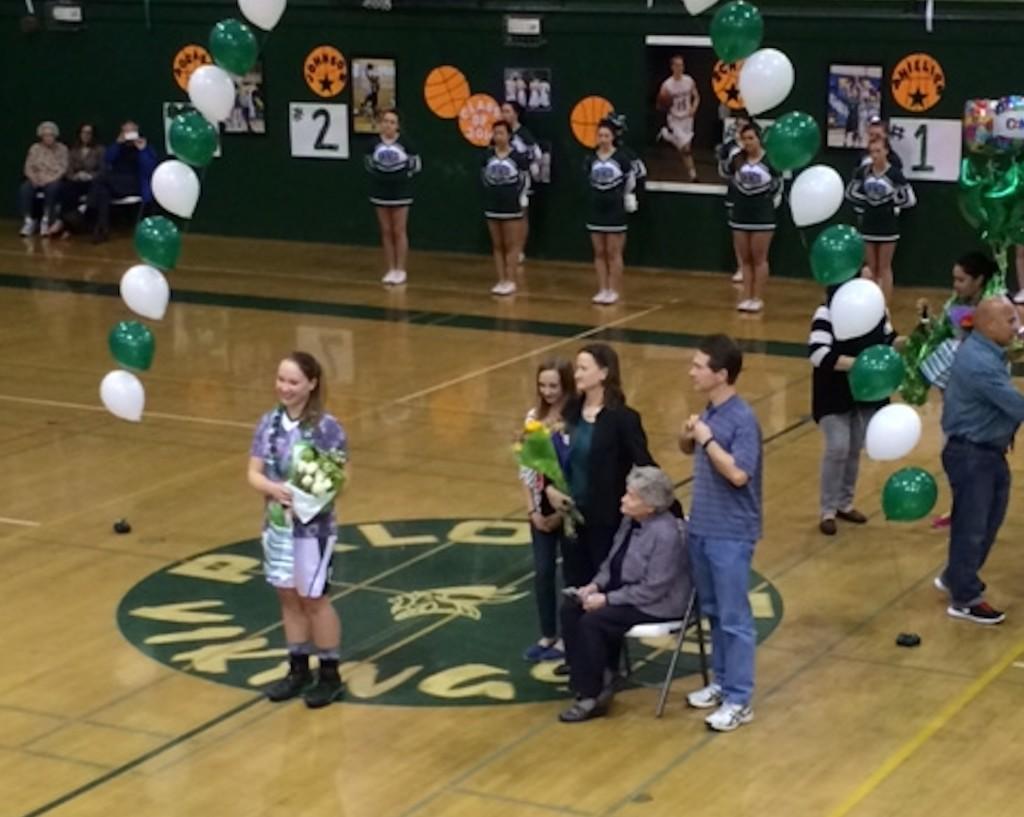 Paly girls’ basketball’s senior night ended with a disappointing loss to the Los Gatos Wildcats. Seniors Hope Crockett (’14) and Charlotte Alipate (’14) were honored tonight in their last home game of their final season.

The first quarter began with the Wildcats and Vikings battling neck in neck for the lead. Both teams scored  three-pointers in the first few seconds of the game bringing the score to 3-3. Another basket by Los Gatos and Lauren Koyama (’17) evened the score again at 5-5. However, the Wildcats’ offense easily broke through Paly’s defense, scoring multiple three-pointers and free throws, bringing the score to 12-8 Wildcats. Despite shots from Alexis Harris (’16) and Skylar Burris (’17), the Vikings couldn’t catch up with Los Gatos’ strong offense and ended the quarter down 10-16.

The Lady Vikes continued to fight in the second quarter starting off with a basket by Harris and Siggi Bengston (’16), bringing the score to 19-14 Los Gatos. The Wildcats continued to score most of their three-pointers, but the Lady Vikes struggled with sinking their three pointers and lost many opportunities to score. After Harris scored two more free throws, the Vikings ended the second quarter down 21-17.

The second half started with the Vikings’ in posession. Los Gatos quickly regained the ball, and increased its lead 24-17. Coco Lovely (’16) put away a basket after a long pass to get out of the Wildcats’ defense. The Vikings could not manage to maximize on their offense and after a series of missed three-pointers, Los Gatos took advantage and got their biggest lead of the game, 31-21.

“We definitely could have finished our shots better,” Burris said.

In the final seconds of the quarter, Bengston stole the ball and raced down the court, but missed the shot at the buzzer, ending the score for the third quarter at 24-33.

As the final quarter began, the Vikings pressed. Maddy Atwater (’16) scored a three-pointer. Not soon after she was awarded a free throw, and the Vikings were only down 33-28. Paly committed a series of fouls that allowed the Wildcats to gain a lead of 37-31. In the last two minutes, the Vikings failed to make their shots and the game ended on a missed three-pointer with the score still at 37-31.

“I thought we played well but unfortunately we didn’t come out with a win,” Alipate said. “I was happy to see my team out there working hard.”

Burris sees where the team could have improved.

“We could have come out with a little bit more energy,” Burris said. “I think we could have played more for our seniors. I think we did near the end more.”

The Vikings made it to CCS, and Sunday will determine when they play next.