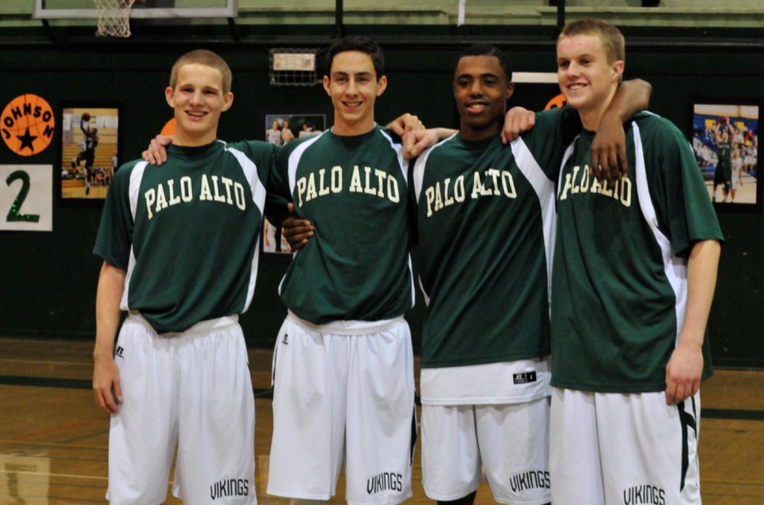 “It was very exciting being senior night, especially with this gym being torn down next year,” Phillips said.

The game started off quick for Paly as the Vikings gained the first possession and Kevin Mullin (’15) put the first points on the board. Los Gatos quickly followed up, and the back and forth continued with Johnson scoring for the Vikings and then  the Wildcats scoring again to tie the score at 4-4.

Schmutz and Mullin both scored for the Vikings to increase their lead to 8-4. The Wildcats then briefly took the lead after scoring six points, but the Vikings took back the lead after Johnson shot a three pointer to bring the score to 11-10. The quarter was finished off by 5 points from Mullin bringing the score to 16-10 going in to the second quarter.

The third quarter started again with two points from Los Gatos followed by a basket by Johnson bringing the score to 29-18 early in the third. Then the Vikings outscored the Wildcats four points to three to bring the score to 33-21. Justin Hull (‘16) scored on both of his two free throws to advance the Vikings’ lead to 35-21. The quarter then consisted of a strong offense on both sides bringing the score to 40-30 going in to the fourth quarter.

In the final quarter, Los Gatos started the scoring with a three pointer one minute in to the quarter. Both Mullin and Phililps scored two points each and Los Gatos scored four points to bring the score to 45-39 before Phillips found the net again for another two points. The Wildcats then put up 5 points of their own to bring the score to a close 47-44 with just over three minutes left in the game.

The Wildcats’ then brought the score to 53-52 with 15 seconds left, after also successfully making both of their free throws. Mullin then finished off the game with the final point from a free throw to bring the ending score to 54-52.

Team captain Phillips was enthusiastic about the win and is looking forward to the next games in the CCS tournament.

“Obviously it was great that we were able to win on senior night,” Phillips said. “We played a great first half, team defense was a little lacking in the second half, but at least we came out on top.  Now we have our first CCS game on Thursday to look to.”

The Vikings will play next in round 1 of the CCS tournament on Thursday February 27 at home, at 7 p.m.