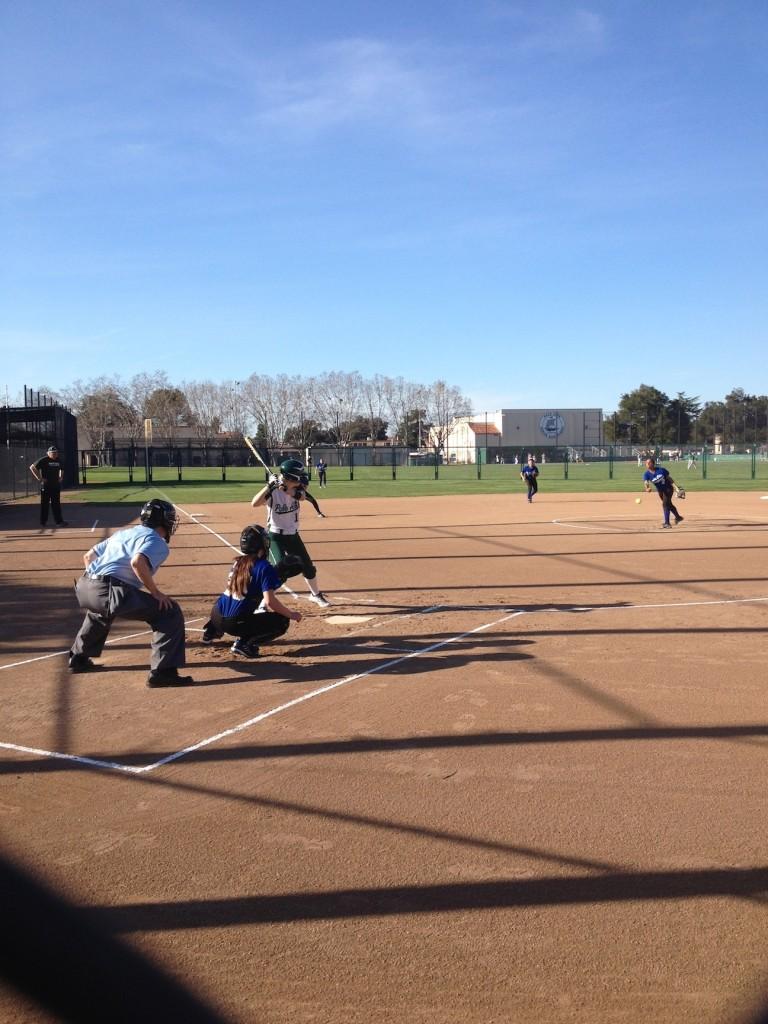 Casey Glassford ('15) stands ready as a first inning pitch comes her way. Glassford would hit into an RBI fielder's choice, part a four run first inning for the Vikings.

The Paly softball team opened the season with a 8-2 win over South San Francisco on Monday afternoon.

“I would give [the game ball] to [Martinson],” Saul said. “She went 3 for 4 today when batting and did a great job behind the plate catching for me.”

Paly started off strong in the first inning as Kabria Dame (‘15) led off with a triple down the right field line. Casey Glassford (‘15) then grounded a ball to the third baseman, but Dame slid under the tag at home to put the Vikings’ first run on the board. Two singles and four walks later, the Vikings were ahead 4-0.

In the third inning, a double by Martinson, a sacrifice bunt, a walk and some passed balls gave the Vikings six. The final two runs were tacked on in the fourth after Glassford tripled, Saul doubled and Martinson singled. South San Francisco managed two runs but was never able to catch up, as the Vikings led the entire game.

“I think we did a great job,” Saul said. “Last year we really struggled and had a record of 3-27 so winning our first game is a really important stepping stone for us. Of course we still have a lot to work on, but we overall had a great first game of the season.”

With a new coaching staff and a strong senior class, the Vikings are in a good position to be successful this upcoming season. With a third of last year’s win total under their belt after just one game, the Vikings will look to make it two thirds this Thursday against Mercy.