Girls’ basketball comes from behind to defeat Mountain View 57-54 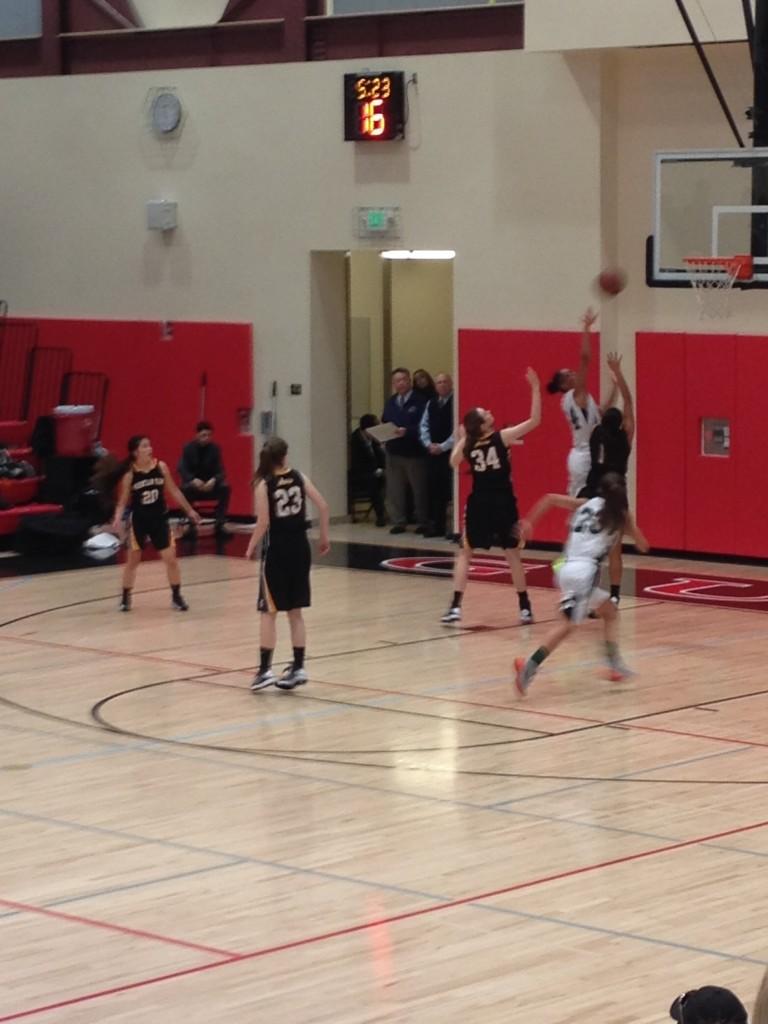 Alexis Harris goes up for a shot against two Mountain View defenders. Paly would go on to win 57-54.

After going one and one against the Spartans in the regular season, the Vikings came from behind in the fourth quarter to secure a spot in the CCS semifinals. Despite not scoring in the second quarter, the team was able to come back and secure a win with timely shooting and strong defense in the second half. Lauren Koyama (‘17) led Paly scoring with 22 points, making six three-pointers and four foul shots.

“We did a great job coming back,” head coach Scott Peters said. “That was a heart wrenching, fight it through, struggle, get it done game.”

The Vikings started off slowly in the first quarter, as the Spartans went on an 8-0 run before Koyama put Paly on the board with a three pointer about two minutes in. The Spartans used a zone defense, and pressed once the Vikings got near the three point line, creating pressure and causing turnovers. Paly shortened the gap, as Koyama hit her fourth three pointer of the quarter, this one a buzzer beater, making the score 17-16 in favor of Mountain View as the first quarter ended.

During the second quarter, the Vikings experienced some set backs. Despite two strong blocks by Alexis Harris (‘16) and Siggi Bengston (‘16) as part of a more limiting defense, they could not score on offense. Mountain View added nine points in the quarter to take a ten point lead at half.

“I think the biggest thing was that we were letting the pressure of the game affect us a little bit instead of just playing loose,” Peters said.

During the third quarter , the Vikings were able to hold their own scoring-wise, but the Spartans were hitting shots as well. Mountain View retained their lead, and by the end of the quarter, the Vikings were still down by eight.

As the fourth quarter started, however, the Vikings found their stride. Two and a half minutes in, a three pointer by Maddie Atwater (‘16) and scores by Harris and Coco Lovely (‘16) had cut the lead to two. Minutes later, Koyama’s sixth three pointer gave the Vikings their first lead of the game at 46-44.

Paly got a scare with three and a half minutes left when Bengston and Harris collided while going after the ball, and both were down on the court for a minute. Bengston was able to continue playing immediately, but Harris was in considerable pain and had to be treated before returning. The Spartans responded, and evened up the game with a couple minutes to go.

In the last couple minutes, the Vikings made six of eight free throws to secure the win. After Mountain View threw up a final shot, Atwater grabbed the rebound and hugged the ball as time expired. With the close win, the players see spots to improve in.

“We need to keep our energy throughout the game,” Harris said. “In the first have we didn’t have it, but in the second have we go it back”

With a playoff win under their belt, the Vikings will look to keep consistent energy through the duration of their semifinal game on Wednesday.

Girls’ basketball comes from behind to defeat Mountain View 57-54