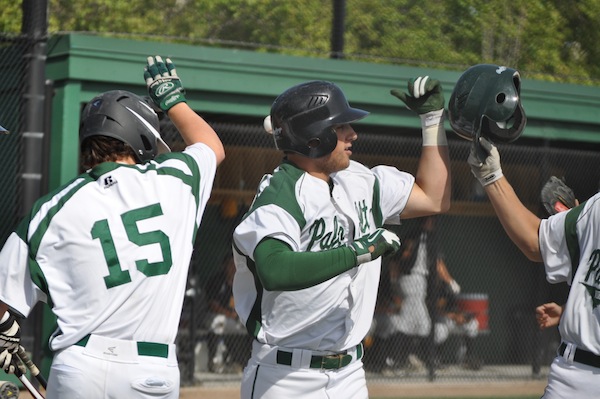 Jack Cleasby ('14) celebrates after hitting a home run in the first inning. The Vikings would go on to win 6-2.

Smith allowed just one run while striking out six. In addition, recently reinstated pitcher Danny Erlich (‘14) appeared in his first game of the year, pitching the final two outs. On offense, Phil Lewis (‘15) went 2-for-3 with a double and a triple, and Jack Cleasby (‘15) hit a home run.

“Offensively, we had some pretty good at bats,” head coach Erick Raich said. “I’d still like to see them doing a better job with runners on base, you know having a quality at bat and getting them in, but [Smith] was excellent on the mound today…and it was nice to win on senior day.”

The Vikings started off hot in the bottom of the first inning. With one out, Lewis tripled to right-center field and Cleasby hit a home run. After a single, a stolen base and a groundout, Austin Kron (‘14) tripled to deep center field but was out trying to make it home on the play.

Mountain View struck first in the top of the third inning. Smith allowed his first hit, a single to left field. The Spartans loaded the bases with two outs and a wild pitch brought in a run, but Smith limited the damage by getting the next batter to ground out.

Paly countered in the bottom of the third with a run of its own. After Bowen Gerould (‘14) walked, Lewis doubled to right field and a sacrifice fly from Lawrence Han (‘16) brought in a run. The team tacked on another run in the fourth inning on a double by Kron, a bunt and a Mountain View error. They added one more in the sixth inning as Gerould walked, stole second, stole third and then scored after the throw to third sailed into the outfield.

In the top of the seventh inning, Brian Kannappan (‘14) came in for two batters, and was then replaced by Erlich.

“I was a little nervous at first,” Erlich said. “I haven’t pitched in four months so it felt great to get back out there.”

Erlich’s first batter grounded the ball to third, but the throw to the second baseman sailed wide. After a pop out, Erlich allowed a single, giving Mountain View its second run of the game. An ensuing ground out, however, brought the game to a close. After his first outing of the season, Erlich felt good.

“My back feels awesome,” Erlich said. “I can’t wait to contribute back to the team some more because it’s been a long time.”

Given Erlich’s pitching on last year’s CCS semifinal team, other players are looking forward to Erlich’s return as well.

“He’s big,” Cleasby said. “If he can pitch like he did last year, that’s another pitcher [and] we always need pitching.”

Raich provided further insight, but was slightly more skeptical about Erlich’s ability to start games in the near future.

“He’s not really in shape right now to go very long, but it would be nice to have him available,” Raich said. “We’re going to keep playing it by ear and see if we can get his stamina up.”

With the end of the season nearing, Erlich may not have much time. The Vikings next contest will be an away game against Mountain View again on Friday. With only a day to prepare, Raich plans to focus on double play feeds as well as defending push bunts. Catcher Ellis Obrien (‘15) feels like the game should be a good contest.

“They’re typically a [team] that can play spoiler with us,” Obrien said. “They play on a grass field so we’re not used to that and they’re tough at home.”