Let Them Cry – The Viking Magazine

I probably won’t be the first to say it, but I’ll say it nonetheless:

As an avid sports fan, saying that feels like blasphemy, even to me. The picture – originally taken from Michael Jordan’s speech during his Hall of Fame inauguration in 2009 – practically exploded across the sports stratosphere, an impressive feat considering ten years ago, social media’s presence was considerably more limited. Considering also, then, that this is the ten-year anniversary of that speech, it seems timely to revisit it.

Jordan has been ridiculed, lightheartedly or not, for a decade now for crying during his speech. That speech, the culmination of his illustrious career, the recognition of six championships, six finals MVPs, ten scoring titles, five league MVP awards, and countless other accolades, now lives in infamy. Not because of his sly arrogance, undoubtedly well-deserved; not because it was unfunny, or because it dragged on; quite the opposite. It lives in infamy because a man who symbolizes an entire sport dared to cry on national television. And it’s an embarrassing testament to what we expect of men involved in sports; of men at all.

Perhaps the issue is not exclusive to sports. But its prevalence in athletics merits further discussion. After all, athletes, male athletes in particular, have come to represent that authentically American view of manhood: machismo, suave, sometimes even chauvinism. We appreciate the family men, the representations of the boy next door and the good-hearted Samaritans; Steph Curry and Giannis Antetokounmpo come to mind. But we revel in, ogle, the ones who represent something altogether more sinister: the parties, the drinking, the hitting and quitting of a never-ending assortment of groupies. Our obsession with the legends of James Harden’s nightclub escapades, Klay Thompson’s yacht trips, and even Kobe’s adultery (or far worse, depending on your take on the rape case), stem from that same revering of Men. Men with a capital M, men who take no prisoners and dominate the competition and exude power and prowess. Men who don’t cry.

Where has the expectation that men cannot cry come from? I’d be hard-pressed to tell you. Crying, such an instinctual response to bitter disappointment or harrowing grief or overwhelming joy, such a defining characteristic of human existence: we are the only species that produces emotional tears, albeit far from the only species that expresses their distress through certain alert calls. Maybe it’s just this; that it’s a sign of weakness. Crying is a physical manifestation of sadness, and to be sad is to be vulnerable. To be vulnerable is to be weak.

And male athletes are not allowed to be weak.

We don’t only mock them for their tears, sure. Any sign of weakness is cause for ridicule. Getting dunked on – regardless of whether that was the proper defensive decision to best contest a shot – is eternal glory for the dunker, eternal shame in the frame of 24 by 36 inches for the posterized. Having your ankles broken is not just an embarrassing display of poor defense, or an impressive exhibition of ball-handling skills by the offensive player; it is a moment of fragility in its purest form, a player reduced to a roadblock on the ground. It is literally a way to put him in his place. Is that why we idolize the Allen Iverson step-over so much? 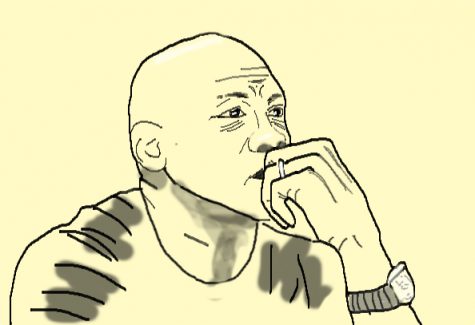 Maybe not. Maybe it is just the badassery of one player showing complete superiority over another. Sports are a competition, and maybe one team or player showing dominance should be cause for the other’s shame. Sports are not about participation trophies, and those who cannot hang shouldn’t be coddled.

But to pretend that any athlete showing a sign of weakness – a momentary lapse in their stone-faced masculinity, or even a vulnerability on the court – should be magnified and parodied and paraded around is ludicrous. Why have we begun punishing passion?

Joel Embiid is the latest to suffer from the Twitter storm of critics. The Sixers suffered a crushing defeat in Game 7 after a Kawhi Leonard fadeaway game-winning buzzer beater, and afterward, Embiid was seen crying walking back to the locker room. Not just tears in his eyes – these were real, heaving sobs. He was crushed.

And fans and the media were delighted. Sports podcasts everywhere have leaped at the chance to discuss whether it was “okay” for Embiid to cry. Journalists have phrased the cameras filming that moment as having “caught him” in the act, as if he was in the middle of some clandestine rendezvous. Fans were ecstatic that one of the biggest trash talkers in the NBA had been brought to tears. But most of all, he was ridiculed; over, and over, and over again. He was called a baby; fans proclaimed that they, manly men that they are, would never cry over a game; he was called a bitch; a loser; Seth Joyner, a former Eagles linebacker and analyst for NBA Sports Philadelphia, chastised Embiid for “crying publicly” – it was a “bit too much,” he said.

When you pour you soul into what you do and come up short, I understand the emotions!! But come on, crying publicly on your opponents & girlfriends shoulder, that's a bit too much!! Cry in the locker room or home! The world doesn't have to witness your tears to know you care! JMO

I don’t think I could adequately put my anger into words at the notion that Embiid should have waited until he got home to show emotion, or that he should have never even cried at all.

To those ridiculing him who have never played in a game of sports in their lives, I implore you to gain some perspective on the passion involved in a game of basketball, in the highest-stakes game of a playoff series, for a young player with the weight of his entire team on his shoulders.

But I don’t need to be making excuses for him. He needs no excuse. Let him cry.

How dare you deride your own brother for loving the game that he plays?

I am no fan of Embiid. I find his antics obnoxious. But I never respected him more than on the night of that Game 7, seeing him break down in tears.

We jeer Chris Bosh for crying; we clown KD for his tears; we turn Jordan and Embiid into viral jokes, never letting them live down the moment they were foolish enough to show the world that they have functioning lacrimal glands.

I take it personally because as a woman, I know how much anguish and pain can be carried in the accusation of being too emotional. As an athlete myself, I know a woman crying in sports is seen as a typical portrayal of the female gender: sensitive, dainty, flowery. A woman getting angry, showing her emotions in an atypical way, has lost it. Passion leads to our derision, too.

I cannot sit idly by and let men get crucified for doing the same.

To participate in sports at the highest level is not only to have been blessed with incredible genetic talent, to have poured hours of work into the craft and to have dedicated years of your life to your game, to have managed to stand out to scouts, to have studied the competition until you know each of their plays by name. It is to have been born with passion, passion that separates those who reach the highest level from those who never commit themselves. Passion that turns a loss in the regular season into an excuse to go shoot around for hours until your limbs feel like they’re going to fall off. Passion that drives a team forward, that forms the very heart of a sport and the passion that imbues a sports bar during the playoffs, the passion that makes me cry when my team chokes in a Game 7 and when they win two championships in a row.

Stop treading on our men’s passion.